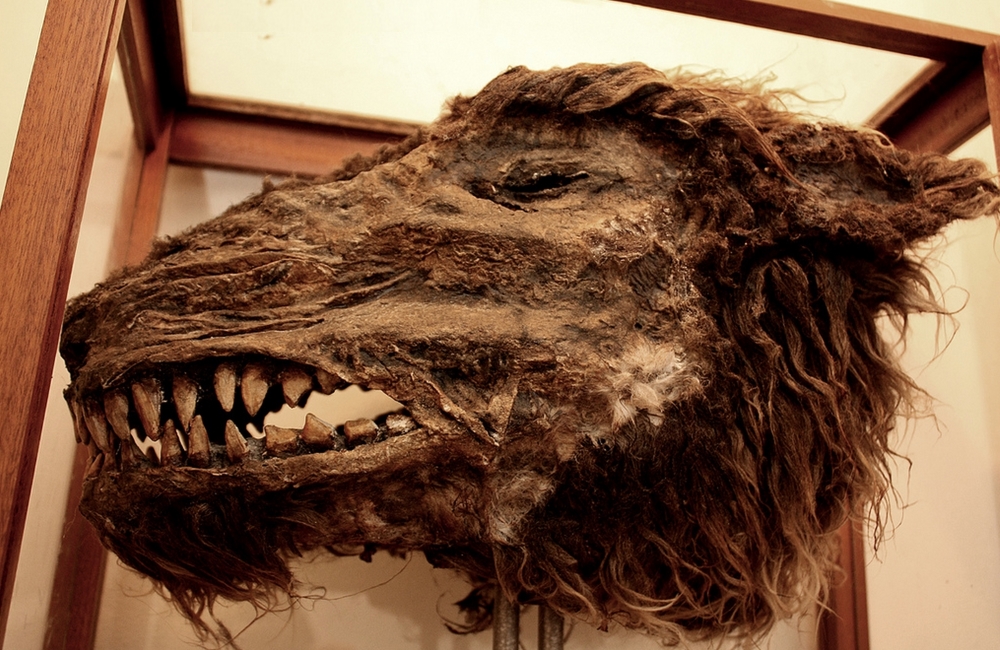 Demolition workers are poking around deep in the recesses of an old abandoned London townhouse. It’s dark. The floorboards creak under foot. And there are cobwebs everywhere. The air is stale and laced with a dark, foreboding sense of mystery and suspense. Keeping their cool, the apprehensive explorers stick to their task; examine the foundations.

The house, itself, hasn’t been touched since the 1940s, so it’s like stepping back through time, to a forgotten, undisturbed pocket of London history. Then, it happens. Someone stumbles across something. A sealed room, filled with thousands of intriguing wooden crates. But when they peel back the lids, the demolition workers can’t quite believe their eyes.

Instead of old letters, stamps and faded postcards, the boxes contain something else. Something completely shocking and out of this world. Something decidedly alien and left of all preconceived realms of normal. A small fanged skull pokes out from one of the crates. A fossilised winged lizard is found curled up in another. Panic sets in. What the hell have they discovered?

At least, this is the fascinating – and somewhat unbelievable – picture painted by artist and so called curator and custodian of the Merrylin Cryptid Collection, “Alex CF.” Working alongside a team of scientists and specialists, Alex describes his charge as, “an extensive menagerie of extinct and unclassified preserved animal specimens.”

He adds that the collection includes the “the supposed cadavers of creatures thought to be no more than myth.” Shockingly, the freakish assortment of oddities is also said to feature the preserved remains of an infant lycanthrope – or werewolf – the fleshy corpse of a horror movie-looking version of the tooth fairy and the fossilized remains of a baby dragon.

According to the photos on its official website, the disturbing collection also includes a preserved decapitated werewolf head, several prehistoric-looking deep sea specimens, a feathered dinosaur, vampires, a jackalope, a gnome and a goblin. It’s all pretty surreal and creepy, really. Especially when you hear about scientists studying and analysing “homo vampyrus” and the membranes of dragon wings.

Supposedly, the collection was put together by Thomas Merrylin, a pioneering “crypto-naturalist, fringe zoologist and xeno-archaeologist,” who was born into an aristocratic family in 1782. According to reports, Thomas’ father Edward, who raised him, became increasingly obsessed with quirky, bizarre objects of natural history when he retired from the army.

And, using the money he made investing in several companies, Edward travelled the world with his son Thomas, seeking out these strange artefacts and undiscovered species. That was until Edward’s sudden death, which left Thomas reeling and turned him into something of a self-taught, work-obsessed recluse.

Inspired by his father’s work, Thomas is said to have travelled extensively, to the “four corners of the Earth,” seeking out strange and wonderful new additions for his ever evolving cache of weirdness. In the short documentary about the alleged find, Alex explains that he was approached in 2007, and asked to oversee the documentation of Thomas’ comprehensive diaries and notebooks.

It all sounds far-fetched and unbelievable, really, but Alex continues, describing Thomas as some kind of mythical figure. An “enigma.” And allegedly, he didn’t age either. When he was in his 80s he didn’t look a day over 40. As such, he was often accused of dabbling in witchcraft and the dark arts to extend his life.

Still, according to the stories, leading researchers stood behind Thomas in secret, urging him to show his bizarre collection to the world. And in 1899, he set off on a tour of the U.S. with a small selection of his most prized unnatural treasures.

However, Thomas’ exhibit was said to have been too challenging for the generally much more conservative public attitudes of the time. The collection was strongly condemned and his creatures were written off as blasphemous, immoral and offensive. The tour was then supposedly abandoned before it got to California.

According to the official museum website, Thomas was far from discouraged. Instead, he threw himself back into his work. He travelled even more extensively, delving into science and mathematical ideas and theories way ahead of his time. Apparently, he also covered concepts like quantum mechanics, time travel and the multiverse, way before such terms even existed.

Then, supposedly, he went quiet and faded into obscurity. That was until 1942, when a man claiming to be Thomas Merrylin approached the Tunbridge Orphanage for Boys. According to the museum’s website, this man wanted to donate his, or Thomas’, London home, on condition that the basement was never opened and the house was never resold.

Strangely, this man was described as looking like he was in his 40s. But by this time, Thomas would have been more than 160 years old. Then, just as suddenly as he’d emerged, the man disappeared again. And finally, in the 1960s, the orphanage was absolved of its promise. Finally, in 2006, the house was scheduled for demolition.

That’s where we came in. Incredibly, demolition workers are said to have stumbled across the long abandoned cellar, which was tucked away behind two rows of brick and all but forgotten, by sheer chance. And since then, a trust was supposedly established to study and document the collection of out-of-this-world finds.

According to the museum website, again, more than “5,000 specimens of flora and fauna” were unearthed. The collection is also said to feature “artefacts of curious origin, fragments of civilizations that once ruled the Earth, [and] ideas and belief systems perhaps better left in the past.”

When pressed to describe one of the items in the collection he’s most fascinated with by Diabolique Magazine, Alex describes the “Alabast.” An artefact that’s, “about a foot long and shaped like a ram’s horn.” He goes on to explain that the item is behind Thomas’ dad’s death, his sister’s disappearance and the source of his eternal youth. Even more bizarrely, it’s described as making a sound like a human voice and as a “sentient artefact.”

Who knows what to make of it all in the end. Of course, your first reaction is to laugh it off and shout, “Hoax,” and, “Fake news” at the top of your lungs. But what if that’s exactly what you’re supposed to think. Maybe… But probably not.

Naturally, the collection has attracted the attention of a lot of detractors and sceptics. And of course, the fact that, essentially, it’s all in the hands of an unheard of 20-something-year-old artist and illustrator, and not open to the public, does raise more than a few eyebrows.

Some have called the collection an elaborate ruse, or art project, put together by Alex himself – which seems most likely. Website Demilked, for example, has written the story off as a work of complete “fictional invention.” But to be honest, the site’s evidence to back that up is even less substantial than Alex’s seemingly longwinded and twisted fairy tale. Albeit, more realistic-sounding.

Still, without any confirmation, I know it’s a lie. It has to be. But I guess, secretly, part of me wants to believe the story’s real. That this recluse, immortal, 18th century genius travelled the world, putting together a creepy, macabre collection of creatures and artefacts straight out of horror and sci-fi movies. Like Newt Scamander in Fantastic Beasts and Where to Find Them. That would be pretty cool. Hey, stranger things have happened, right? Again speaking to Diabolique Magazine, Alex summed it all up perfectly, “I hope that people will be able to step back from a time when we think we know all, and embrace a time of wonder and trepidation.” Yeah right…