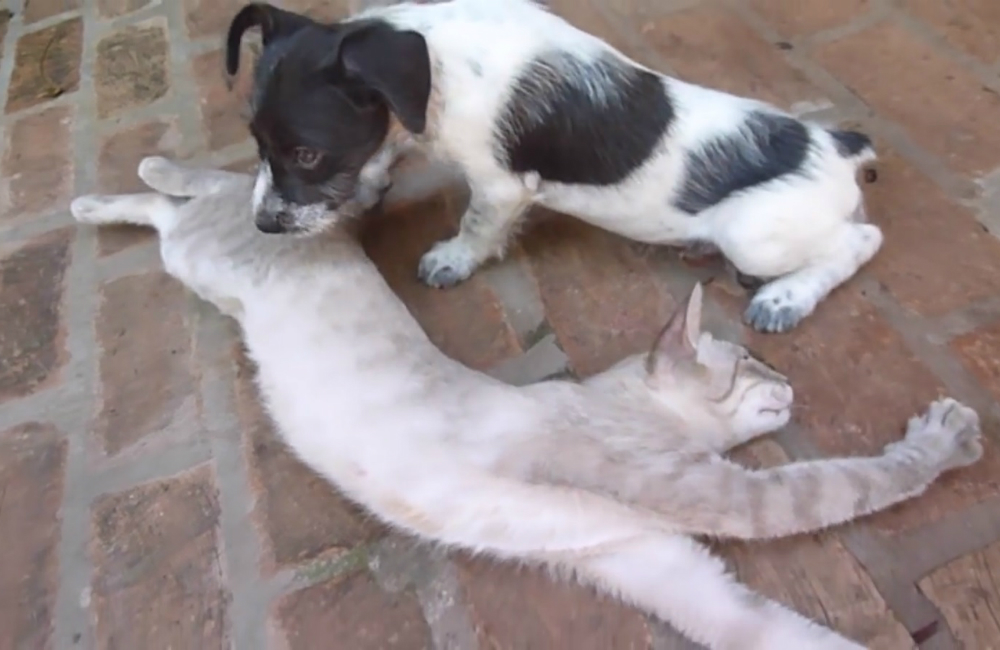 This poor little puppy was all alone in the world but a kind mother cat took him in as one of her own. She watched over him, took care of him and let him snuggle up to her. However, their relationship was even closer than you might guess.

When you see a puppy or a tiny kitten, you can’t help but think about just how adorable they look – you want to take them home and look after them. That said, it’s more unusual for animals to adopt the offspring of other species. This odd couple did just that, though, and their bond couldn’t have been closer.

Cats and dogs are meant to be the bitterest of foes – two animals so different in nature that they simply can’t get along. Tradition has it that, since time immemorial, dogs have been chasing cats out of yards while the felines have been batting away inquisitive or overaggressive pooches with their claws. This puppy and momma cat seemed like they were made for each other, though.

Whether they were cuddling or snuggling, they loved each other’s company. And it looked like this kind mother cat would put up with almost anything from her charge.

But their story together didn’t begin so happily. The puppy had been left an orphan without parents or anyone to look after him. Fortunately for him, though, there was help at hand.

The mother cat had given birth several days before and she would go on to let the puppy join her litter of kittens. They might not look alike but she made room for him. And that was despite the fact that he was almost as large as she was.

Nevertheless, the mother cat treated him like one of her own babies. And you might well be surprised by just how much she was doing for this sad pooch.

Juan Johansson, the owner of the pair, as well as several other animals, was a resident of Parana state in the south of Brazil. He is a music professional and works as a sound engineer.

He’s also an animal-lover. In one video he films an enormous insect that he has found beneath a stage. This was no micro-beastie, either – it was larger than an outstretched human hand.

When he’s not looking after his four-legged companions, Juan is a fan of hiking and of exploring nature. And he’s more than capable of pulling himself along a rock face or tightrope-walking along a pipe.

When puppies are first born they are almost helpless – and they sleep a great deal. Juan’s pup was a little older but at this stage, they’re rarely ever separated from their birth mothers.

As he grows up the pooch will be mastering control over his body, feeling his permanent teeth come in and beginning to understand the boundaries set by his owner. It’s a challenging time, and without his parents, this pup would be going through it alone.

Fortunately, this mother cat was there for him. And this loving momma didn’t just cuddle the little pup – extraordinarily, she actually let him drink her milk, seemingly without batting an eyelid.

Many online users were touched by the heartwarming story with footage capturing the two animals rolling around together. One user commented, “Waw! Amazing.” Another wrote, “Aww, this is too cute. ^_^”

Others wondered just how young the puppy was, considering his size. Juan, however, insisted that the little creature was in great need of help and that there was nothing but goodness in the relationship between the two animals.

“This cat adopted this little puppy as her own, if she didn’t like it she wouldn’t let him,” he explained, underlining the fact that the dog had by no means overpowered the cat. The mother’s kittens meanwhile, were being amply cared for, he said.

The pair are not entirely unique either. All kinds of extraordinary animal friendships can be found online – pairing everything from elephants and dogs to giraffes and ostriches.

In other cases, four-legged moms have allowed babies of other species to join their broods. This dog, feeding a batch of tiny kittens, was spotted in Mexico.

Momma dogs in Mexico are often separated from their pups while they’re still young so that they can be quickly sold off. And, incongruously, the individual who photographed the dog – Reddit user elp22203 – found her at a cat shelter.

Having been left without her pups, the dog had become depressed. Her life must have changed in a big way with the introduction of a batch of little kittens, though. What’s more, her story has a happy ending.

Once the kittens had been weaned, both momma and babies were separately adopted and went to new homes. And it was in fact elp22203 who would eventually give the big-hearted dog a forever home.

The stories of these kind momma dogs and cats just go to show that love can come from unexpected places – and when it’s desperately needed, it can make all the difference. No doubt the lives of all of these little animals have been permanently changed for the better by the experience.