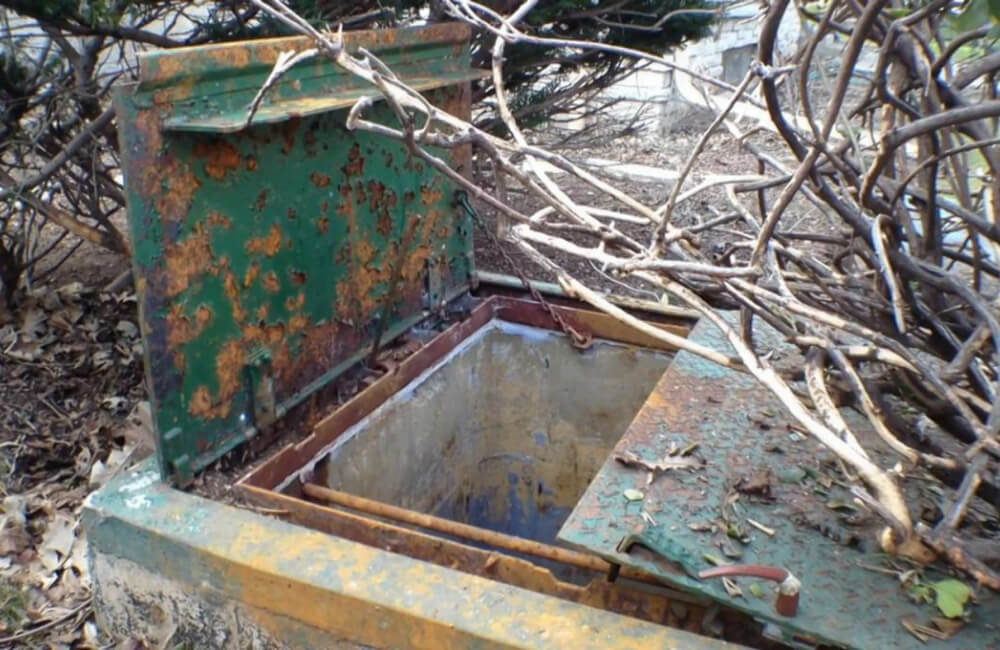 This family had a strange hatch at the end of their yard. In all the years that they had owned the property they had never inspected it, though. They assumed that there would be nothing of interest inside. But they were wrong. On the other side of the hatch they would make a spectacular discovery.

The Zwick family had lived in their home in Neenah, Wisconsin for more than ten years. They knew that there was something unusual at the end of their yard, buried deep in the shrubbery. In fact, there was what looked like a heavy steel hatch there. And it had gone unopened for as long as anyone could remember.

Indeed the Zwicks had never investigated it. It was only in 2010 that they decided to take a closer look. They had to make their way through thick weeds just to get to it. But they didn’t hold out much hope for what was inside.

There are many people who would be unable to resist investigating if they were presented with a mysterious portal into the unknown. Others would be afraid of what they might find on the other side – and we can well imagine that few people would want to brave it alone.

“We assumed it was just this empty space,” Carol Hollar-Zwick explained to the Appleton Post Crescent. However, she would soon be proven very wrong.

First, the family would have to remove the plant life covering the hatch. Next, they would have to take off the lock that held the hatch shut. It was a door that hadn’t been opened in perhaps 50 years.

On opening the hatch, they found a ladder. At its base was a chamber that measured just eight foot by ten foot. And it was five foot deep in murky water.

The family made their way down the ladder and into the darkness to began exploring the strange space. However, while it contained water this structure was by no means a well.

It seemed that the chamber had flooded, whether from rising groundwater or from a leak in the hatch. Meanwhile, floating around the chamber were packets – with markings showing that they were from the US Army.

The chamber also held old ammo crates. The family were worried that they might contain explosives – so they called in agents of the Bureau of Alcohol, Tobbacco and Firearms. But they would be surprised by what the crates actually held.

In fact, when the ATF agents cracked open the crates they discovered that they contained Hawaiian Punch – among other things. The floating parcels, meanwhile, contained food supplies. And these items were decades old.

However, as all the items had been held in airtight containers they appeared to be in surprisingly good condition. Indeed, the chamber contained a veritable time capsule of 1960s America. Items included Corn Flakes, Butterscotch Bits and Del Monte raisins as well as clothing, bedding, medical supplies and even candles.

On inspection, these supplies could well sustain an entire family living underground for days or weeks. And that was precisely what the strange chamber was in fact intended for.

It had been built in 1960 as a fallout shelter. In the event of the outbreak of nuclear war, the homeowner – surgeon Frank Pansch – intended to head underground with his family.

During the Cold War, the USA and the USSR were restrained from entering direct conflict by the fact that both superpowers had vast nuclear arsenals. If either side directly threatened the other, they had the power to launch an overwhelming attack.

This was the logic of Mutually Assured Destruction. If war broke out, both sides could inflict – and would almost certainly receive – tens of millions of civilian casualties. The two powers were locked in a stalemate.

The shelter wasn’t intended to resist the devastation of a nuclear blast, however. Instead, it would allow the family to escape the lethal effects of radioactive fallout following an atomic explosion.

With the Cuban Missile Crisis bringing America and the Soviet Union to the brink of nuclear war there was a craze for building shelters in the 1960s. However, the small city of Neenah is some 200 miles from Chicago and 80 miles from Milwaukee, so would have likely gone relatively unscathed.

The stunningly preserved supplies offer a window on this now-forgotten Cold War world. It’s all too easy to imagine a 1960s family heading beneath ground if conflict broke out, though. It’s harder to know, however, whether this shelter would have been enough to save their lives.

“It’s interesting that you can open up something and find 1960 inside of it,” Carol Hollar-Zwick told the Appleton Post-Crescent. The Zwicks ultimately decided to donate their haul to the Neenah Historical Society, which put on an exhibition of the finds.

“It will really give people a sense of what it was like to live in 1960, to feel like they’re in their living room, and suddenly they need to go to their fallout shelter,” the executive director of the Neenah Historical Society, Jane Lang, told FOX 11.