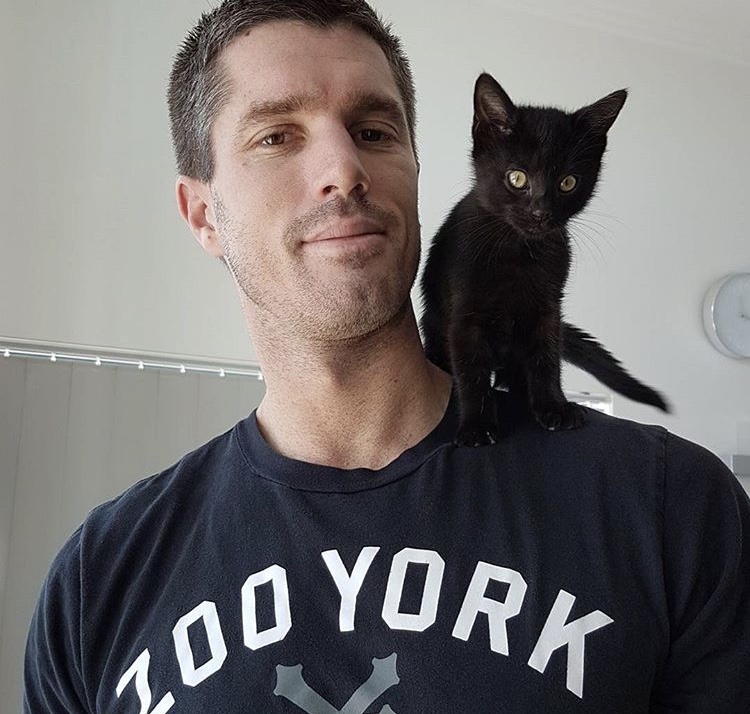 Having a bad day? Need something to cheer you up? Well, look no further than this heartwarming story of this incredibly quirky cat! When you think about cats, you normally assume that their biggest fear would be anything to do with water. But not this cat! Meet Nathan, the Aussie black cat that loves nothing more than swimming in the ocean! However, despite Nathan’s masculine name, she is, in fact, a female kitty who loves nothing more than going to the beach in her hometown Queensland, Australia with owners Rian and Mellissa.

It all began when her owners Rian and Melissa decided to take Nathan to the beach to let her explore the outdoors after she spent all of her time inside as an indoor cat. Nathan’s owners were a little apprehensive taking their pet somewhere so open planned such as a beach. But to the couple’s great surprise, they noticed that Nathan was unafraid of the beach and couldn’t believe their eyes when they witnessed their cat enter the water without a hint of trepidation!  They couldn’t comprehend that a cat would want to go anywhere near H20.

Just look at Nathan swimming in the ocean! She sure does look like one happy kitty being in the water and is definitely killing the stereotype that cats despise water! How hilarious is that video?!

When the couple saw their beloved pet pouncing and attacking at the water, gathering bits of seaweed, and sometimes even small fish, they were understandably, shocked that their cat enjoyed being in the water. There is definitely never a dull moment for the feisty cat!

The couple told Buzzfeed that they gently introduced Nathan to their outdoor lifestyle, and she gradually learned to follow them into the water. “She followed us as we walked around the beach. She was a very good girl and didn’t even need her leash. Each time we took her to the beach, her confidence would grow and she would wet herself more and more until she would eventually swim!

It’s amazing and totally heart-warming to see Nathan in the ocean as she swims and splashes in the water! It is important to mention that she is always in close proximity of her owners and is well looked after whenever she ventures into the water.  In fact, Rian acts as Nathan’s lifeguard, which undoubtedly cemented the bond between pet and owner. How cute is that?

Nathan is definitely a happy and content cat now, but she didn’t have the best start in life. The beautiful black cat was abandoned at an early age and was found in a box by a highway. It was only until Melissa and Rian went to a cat shelter to adopt a new fur-baby when they first set eyes on Nathan.

Since witnessing Nathan’s strange penchant for swimming in the ocean, not only has it strengthened the bond between Nathan and her owners, but Rian and Mel decided to create an Instagram account to show off her special swimming abilities, and it’s fair to say that little Nathan has become an Internet sensation! Since the inception of her Instagram account in September, she has amassed over 10,000 followers and growing! Not bad for a little black cat, eh?

Hundreds of social media users flock to Nathan’s Instagram account on the daily, with many users leaving comments such as, “This is so awesome!”, ” I need a beach cat!” and “WOW! I’ve never seen a cat do that. Amazing!” People are totally taken aback at the quirky cat’s beach antics!

Wasn’t Nathan the cutest looking kitten?! But there definitely is a question mark when it comes to her quirky masculine name! Owner Melissa told Culture Trip why she gave Nathan her moniker. “We named her Nathan at first as a joke before we actually got her. Nathan is the name of a character from a show my partner and I have watched called ‘Angry Boys.’ But once we brought her home, we actually quite liked the name, and it stuck, despite not really being a girl’s name. It still makes us laugh sometimes and we can’t imagine her being named anything else.”

The camera definitely loves Nathan as her Instagram account is filed to the brim with beautifully shot photographs of her living her best life in the water and when she is just chilling with her owners. Check out this Insta-perfect shot above of Nathan and her owner! Maybe Nathan should become a professional cat model?

After every trip to the beach, Nathan takes a bath to wash away the salt water and sand, enjoying the time with her owners and getting all clean! This one-of-a-kind kitty deserves every one of her followers.Just look how content she looks sunbathing in the picture above!

A man and his cat… Rian and Nathan are definitely a unique duo, it’s not very often we see cats at the beach! Nathan is definitely, without a doubt, a celebrity in her own right in Queensland!

Such an adventurous kitty! Look at Nathan pouncing through sand-dunes, there’s no way this cat wants to be stuck indoors! There is just something so comical about seeing a cat in such an unnatural location such as a beach! She is definitely one of a kind.

Nathan is at her happiest whilst swimming in the ocean. Just look at her! She looks like such a little water kitty. We can’t blame her, it must be heavenly to swim to be able to swim in one of Australia’s many beautiful beaches.

It’s unbelievable that Nathan took to water so naturally. She definitely has the time of her life with her new owners and visiting the beach regularly. It’s amazing to think what kind of life Nathan would have if Rian and Melissa didn’t adopt her. But, it’s definitely heartwarming knowing that Nathan is living her best life with her new owners and discovering her talent of swimming!

What a cool kitty! Nathan is a cut above all cats and now that she has conquered the universally thought fear that all cats are petrified of water, there probably isn’t anything else she can’t conquer! Her love for the beach has grown by leaps and bounds and she hates to say goodbye to the water. We look forward to seeing all of her future adventures swimming in the ocean on Instagram!