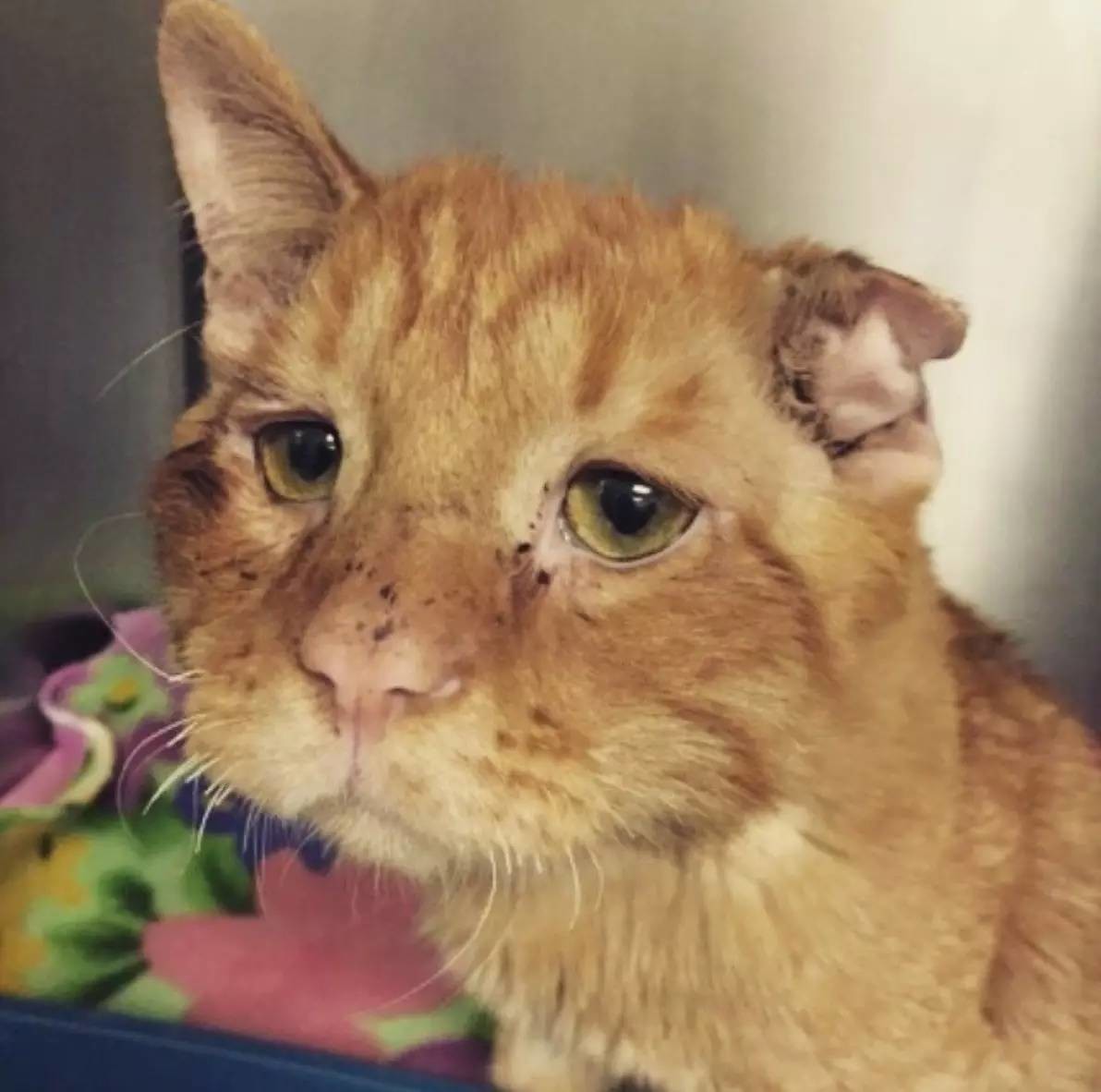 Time’s running out. If BenBen the stray tabby doesn’t find his “forever home” in the next 24 hours, he’s going to be put down. Seemingly resigned to his fate, BenBen sits motionless in his lonely Vancouver hospital cage. His eyes glazed. His spine crushed. His heart broken. Only a miracle can save him now…

A few weeks earlier, BenBen was rushed to the Vancouver Animal Emergency and Referral Centre by a concerned British Columbia SPCA officer. He had severe puncture wounds, deep infected cuts and a badly damaged spine. Additionally, half of his left ear was missing and veterinary technicians feared that his injuries were so brutal he’d never walk again.

The morning after he was brought in, BenBen was transferred to the BC SPCA’s Vancouver Animal Hospital, where he was treated for another 10 days – and even developed a nasty bone infection. Finally, BenBen was put up for adoption. However, due to his ongoing medical conditions and serious need for around-the-clock attention, hospital staff weren’t optimistic.

“He was so broken and tiny and thrown away, like no one wanted him,” explains veterinary technician Sandy Windover, speaking to online pet resource PawCulture. Things didn’t look good, and eventually, after a couple of attempted adoptions had fallen through, BenBen’s heart-breaking story took an even darker and more tragic turn.

Just when it seemed like things couldn’t get any worse for poor BenBen, VAERC staff decided that his situation was simply too dire for your average cat lover to cope with, and that he required the dedicated attention and care of a trained professional.

BenBen’s back injuries and lifelong dependence on painkilling morphine were deemed too severe and, sadly, he was reclassified as unadoptable and scheduled to be euthanized. Or put on the “kill list.” Unless, of course, some kind soul could step in and give him the kind of specialized attention and total care he needed.

Windover believes that the reason nobody wanted to take BenBen home is he was just “so broken” and “so sad.” She also believes that he gave up on life and was “ready to be euthanized,” because he couldn’t find his “forever home.”

With just days to go, things looked bleak for BenBen. He barely moved. He wouldn’t eat. He wouldn’t drink. And according to hospital staff, it was “almost as if he knew he was going to die and had just given up hope.” His spine, it turns out, was crushed in five or six places.

On top of that, due to the seriousness of his back injuries, it still didn’t seem likely that BenBen would ever walk again. Interestingly, his full name, given to him by VAERC staff, is Benjamin Button, because he dragged himself around like an old man, even though he’s only two years old.

That’s what makes BenBen’s tale even more distressing, really; how can a creature so young be so broken – both physically and emotionally – that the only option is to give up on him and put him down? It breaks your heart. But just as it seemed like all hope was lost something incredible happened.

The day before BenBen was scheduled to be put down, Windover decided that she simply had to take action. She texted her partner, Adam Tutt, to check if she could bring BenBen home to New Westminster with her and he agreed. Just like that, BenBen had finally found his “forever home.”

“We decided to adopt him because he’s just a baby, and we believe, even if animals are broken or ‘not normal,’ they deserve a second chance and a loving home,” explained Windover to the New Westminster Record.

BenBen’s luck, it seemed, had finally changed. Windover and Tutt took him home and set him up in their bathroom, to give him a chance to get used to their other cats. But after just sixty minutes, BenBen was purring, playful and desperate for “thank you” cuddles.

It was a miracle. Just like that, BenBen was a completely new cat. All it took was love and affection. “I like to think he knew he was safe and had his forever home at that moment,” said Windover, speaking to LoveMeow.com. Naturally, Windover and Tutt were blown away by BenBen’s dramatic transformation.

At first, BenBen wobbled and struggled to stay on his feet on Windover and Tutt’s smooth linoleum flooring. To counteract his lack of traction, the couple lined their apartment with donated yoga mats, which helped keep BenBen upright as he built his strength back up.

Slowly, BenBen got to work exceeding expectations and proving BC SPCA veterinary technicians wrong. Gradually, he began to walk and even run, albeit with a noticeable wobble. Incredibly, to everyone’s surprise, BenBen somehow threw in a few small jumps as well. “He’s gotten much more adventurous and wants to explore and smell everything,” Windover explained to PawCulture.

Believing BenBen’s incredible tale of survival would resonate with people online, Tutt shared side-by-side before and after “death row” photos of the resilient ginger on reddit. And to his surprise, the post went completely viral. Next, Windover and Tutt started Instagram and Facebook profiles for their inspirational cat, and he blew up even more online.

A photo of BenBen waiting to be euthanized in the BC SPCA hospital was shared thousands of times, and BenBen was dubbed the “saddest cat on the internet.” However, these days, he’s anything but, which just shows you the true transformative power of love. All it took is a little of bit of tenderness and care and a broken stray became a treat-chomping, tablet-game-playing, night-walk-loving house cat.

To date, BenBen has more than 74,000 followers on Instagram and 18,949 followers on Facebook. He even has his own subreddit. In short, he’s become a bona fide online cat celebrity. BenBen may have had to overcome a long treatment program for his bone infection and be forced to take morphine for the rest of his life for his crushed spine, but his recovery has surprised and inspired everyone he’s come into contact with.

Windover and Tutt aren’t just sitting on BenBen’s newfound internet fame, either. Instead, they’ve started a GoFundMe campaign for similarly down-and-out stray animals in need of help. To date, the campaign, which is still active, has raised $11,431.

Frustratingly, the cause of BenBen’s shocking injuries is still a mystery. Although the theory is he was attacked by a larger animal, possibly a dog. Still, whatever the cause, it’s the effect that has touched and resonated with thousands of people around the world.

BenBen’s moving story is a heart-warming reminder that love can truly conquer all, and proof that we can all be reborn if we’re just given a second chance to shine. Windover and Tutt saw the love-starved soul buried within BenBen’s broken, discarded exterior, and his incredible resilience and robust inner strength are truly inspirational and touching.