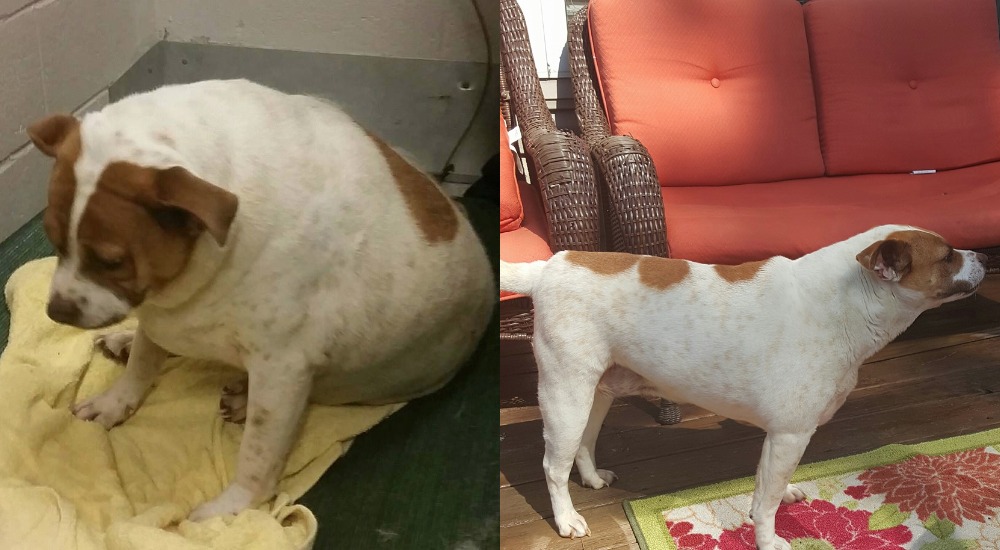 When Pearl the Jack Russell Terrier was found wandering the streets of Georgia, her life hung on the brink. Indeed, dangerously overweight, the poor pup could barely walk. Eventually, however, she found her way to a local rescue center – where her grueling recovery could begin. And two years later, her transformation was incredible.

In September 2014, four-year-old stray Pearl was spotted in a parking lot in Augusta, Georgia. But she wasn’t any ordinary stray dog: in fact, she weighed a whopping 76.5 pounds. It was clear that she desperately needed help with her dire situation.

A concerned local resident, then, quickly called up a nearby rescue center, Augusta Animal Services. As Pearl was a stray, however, there were very few details that they could ascertain about the pooch. Indeed, there was absolutely zero explanation available as to her gargantuan weight.

Due to that weight, however, Pearl suffered from various health problems. She couldn’t walk, or even move her head. And according to veterinarians, her heart could have stopped at any second. In fact, Pearl’s rescuers were worried that they might have to have her put down, before she succumbed to other complications anyway.

But then, not long after she arrived at Augusta Animal Services, Pearl was adopted by Dog Networking Agents, a foster program focusing specifically on pooches. One of the charity’s co-founders, Hayley Zielinski, had heard about Pearl’s plight.

Zielinski told the Augusta Chronicle, “We realized nobody else could really deal with this extreme case, and we wanted Pearl to make it.” And so, after a brief period in a rehabilitation center, Pearl moved to Zielinski’s home as a long-term foster animal.

At the time, Pearl was in such a dire physical state that she couldn’t walk far without having to lie down, and she certainly couldn’t climb steps. When she arrived at Zielinski’s home, then, her new human had to create a makeshift bridge between the car and the top of the stairs ton her house, so that Pearl could walk across it.

As such, Zielinski put Pearl through an intense exercise regime, with her diet cut back dramatically. And as a result, the portly pup ended up losing a pound a month. However, her poor fitness levels led to several complications, including Pearl contracting pneumonia.

Thankfully, Pearl managed to successfully battle through the illness, and resumed her long road to fitness. As part of her recovery, she paid regular visits to Aiken Pet Fitness and Rehab for physical therapy sessions. And after six months, she was beginning to show signs of progress.

Indeed, by March 2015, Pearl had lost 16 pounds, and could finally walk around Zielinski’s house without losing her breath. And she could even roll onto her back, something that she could only really dream of doing before.

The vets soon figured out that there were no real medical reasons for Pearl’s excessive weight levels. It turned out that she’d simply been overfed to an extreme degree by her previous owners, before being cast out on the street. It didn’t help that she was also very lazy, but the vets figured that once she started slimming down, she would become more active.

Once she began losing weight, however, it quickly became obvious that that wouldn’t happen. Sybil Davis, founder of Aiken Pet Fitness and Rehab, told the Augusta Chronicle, “We thought before that she was lazy because she was so fat. Now we know she’s fat because she’s so lazy.”

Nevertheless, even though she was on the road to recovery by this point, Pearl wasn’t really on board with playing outside, or even going for walks. Indeed, that time was still a distant dream for the poor pooch.

But Zielinski refused to give up on the overweight animal. She put plenty of effort into a strict exercise regime for Pearl, which even involved making her walk for her food by throwing it across the floor.

It wasn’t just weight loss that Pearl required physical therapy for, however. Indeed, she also needed to improve her muscle, coordination and balance – all things that had suffered due to her egregious weight levels.

Pearl’s intense exercise regime involved training on an underwater treadmill and using exercise balls. And while she had begun making progress as a result of these routines, Zielinski knew that she was in for the long haul with Pearl.

But just two years later, in March 2017, Pearl had made a spectacular transformation. In fact, she’d slimmed down to just 44 pounds – still not quite her ideal healthy weight, but a tremendous difference to where she’d been just two and a half years previously.

Zielinski told the Daily Mail that she was massively proud of Pearl’s progress. “She went from being trapped in her own body and scared of the outside world to confident,” she said. “Plus she can even jog every now and again.”

Indeed, Pearl can now go for walks like a normal dog, although she’s still incredibly lazy. For instance, Zielinski says that often while on walks, Pearl will simply drop to the ground and refuse to move another muscle.

Indeed, in her local community, people recognize Pearl everywhere she goes. “People point when they see her and say, ‘Oh my god, that’s Pearl’. She’s very popular in our community,” Zielinski told the Daily Mail. “Everybody loves her and she’s inspiring a lot of people to lose weight themselves.”

When Pearl was found lost, alone and overweight in that Augusta parking lot back in 2014, things didn’t look good for her at all. But through a combination of diet, exercise and a whole lot of love and commitment from Zielinski, she’s since made an absolutely remarkable transformation, turned her life around – and become a true inspiration.