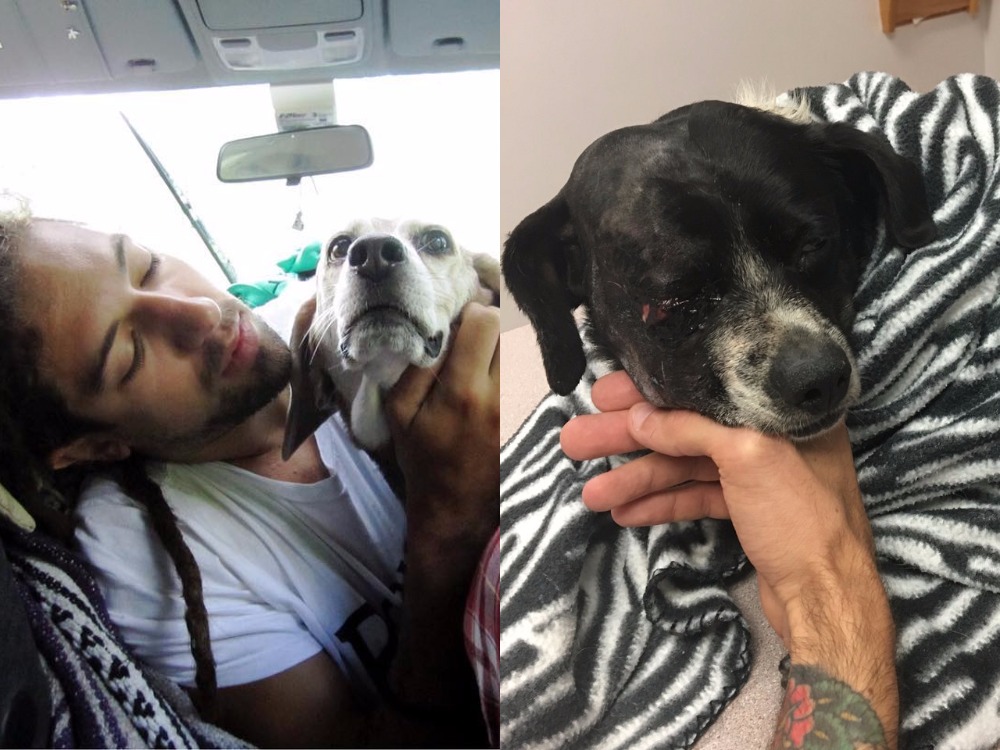 When they lost their beloved pet dog to old age, Ryan Hunter and his fiancé Lisa didn’t want to rush into looking after another animal. However, when they witnessed an abandoned pooch maimed in a horrific accident, they couldn’t let his pain go untreated. And their unbelievable kindness led to them finding a new friend.

Long Island based musician Ryan Hunter seemingly had the perfect life. As the frontman of bands 1st Vows and Envy on the Coast, Hunter was making a living doing what he loved and had the perfect companion in his now-fiancé Lisa. But – after making Lisa’s acquaintance in 2011- Ryan realized that something was missing from his life.

Around the time that the two lovebirds first made contact, the pair were blessed with an old face from Lisa’s past. Indeed, Lisa’s family beagle Travis was left without a home and desperately needed someone to look after him. And both she and Ryan had no choice but to welcome the helpless hound into their family.

Getting used to their new companion was something of a challenge. Unaccustomed to his new surroundings, Travis would bark constantly and suffered from great anxiety in the care of new owners. Nevertheless – as the dog became friendlier and more responsive – Ryan found something he didn’t know he was looking for.

By all means, Ryan had been afflicted with great amounts of personal and professional stress. Suffering from a creative drought, the singer lost confidence in his music and his head became filled with self-loathing. But having something to look after changed his mind set and he was again able to focus his energies on constructive pursuits.

In the intervening months, Ryan and Travis became inseparable. As he later admitted on Instagram, he rarely left the beagle alone for longer than three to four hours. And though Travis could still be handful, Ryan remained loyal to his dog and brought him everywhere he could.

“He literally got me out of bed every day,” Ryan told followers on Instagram. “He helped me scrape myself together and forced me to be present. He spent those months with me when I was petrified to be alone with myself.”

But as the years went on, Travis’ health deteriorated with old age. Besides losing his eyesight and hearing, the beagle also began to suffer from diabetes. Eventually, it got to the stage that both Ryan and Lisa knew he wouldn’t be able to pull through.

In late 2016, Ryan and Lisa made a decision that no dog owner ever wants to make. Tearfully, the two took Travis to the vet to say their final goodbyes. And as their former-friend slid slowly away, the couple found it impossible to stop the tears from flowing.

The pair’s devastation was so great that Ryan couldn’t keep hold of his senses as they made the sad journey home. “As we pulled away from the vet’s office, Lisa received a call from the reception,” he detailed on Instagram. “I’d left my glasses inside. I was about to drive home and I hadn’t noticed I couldn’t see five feet in front of me.”

Following Travis’ death, Ryan and Lisa were so heartbroken that finding a new dog was the last thing on their minds. But fate had different plans for them and – during a drive in Los Angeles last month – the pair crossed paths with a homeless dog named Forrest.

While parking their car, Ryan and Lisa spied Forrest across the road. Much to their horror, the dog wandered into traffic where he was knocked down by an oncoming van. Concerned for Forrest’s safety, Ryan sprinted over to help, but this only distressed the pooch further.

Overcome with anxiety, the injured dog turned and ran leading Ryan to follow after him. Through numerous roads and sidewalks, the musician kept up his pursuit until he saw Forrest lying down under a tree. Carefully, Ryan crept closer yet the mutt still tried to push him away.

As Ryan made his approach, Forrest bore his teeth and lunged towards his would-be rescuer. Nonetheless, this did little to deter Ryan’s urge to help and the resolute animal-lover stayed close by his side. Minute by minute, Forrest grew more comfortable in the singer’s presence until the pooch allowed Ryan to pet him.

Eventually, Ryan gained the hurt hound’s trust enough to pick him up and wrap him in a makeshift blanket. With time against them, Ryan and Lisa began searching for the nearest emergency room. Luckily, they managed to get Forrest to a vet before it was too late.

Though the veterinarian managed to save Forrest from certain death, the dog’s chances didn’t look good. Due to the sheer force of the collision, Forest was suffering from brain swelling, a below average heart rate and innumerable skin injuries. What’s more, his right eye was beyond repair and had to be amputated.

To make matters worse, the possibility of Forrest finding a home after being released from care were slim to none. Besides his numerous injuries, the canine’s fur was swarming with fleas and he wasn’t neutered. As a result, his examiner deemed him unsuitable for adoption and the dog faced being euthanized once inside a shelter.

But this wasn’t good enough for Ryan and Lisa. They’d already witnessed one dog die in the space of a year and the two weren’t prepared to go through the ordeal again. With Travis’ memory fresh in their minds, they decided to take matters into their own hands.

Though they didn’t have the money to care for another sick dog, Ryan and Lisa offered to adopt Forrest themselves. After signing the necessary documents, the couple welcomed the stricken pooch into their family. And their love and support helped Forrest get back on his feet.

Things between Forrest and his new parents weren’t easy to begin with and the dog remained reserved and fearful throughout his first few days in their care. However, the canine has continually shown signs of improvement as well as a growing love towards his owners. As Ryan put it to The Dodo, “Every day has been a small victory.”

Although caring for an ill pet can be expensive, Ryan and Lisa are finding ways to make it work. Currently, the two are taking donations through PayPal to help with Forrest’s hospital bills. Meanwhile, Ryan’s band Envy on the Coast has raffled off prizes to help as well.

Through all his suffering, Forrest has shown himself to be a loving and compassionate companion. Moreover, his presence is allowing Ryan and Lisa to heal from Travis’ absence one day at a time. While nothing can replace the loss of a pet, Forrest has helped Ryan regain the purpose he once had. And it seems that nothing will ever drive them apart.