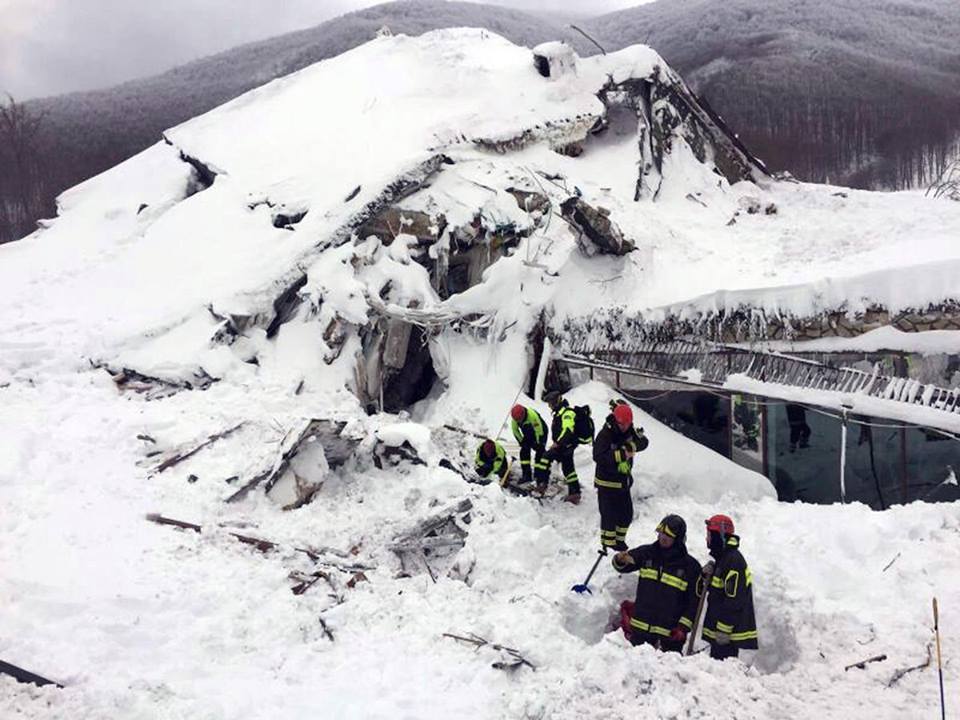 When a devastating avalanche struck the Rigopiano Hotel in Italy, rescue crews worked tirelessly. The thick snow completely covered the hotel. It rocked the ground and sent a chilling echo across the land. Finding any survivors inside seemed almost impossible. After uncovering tonnes of heavy rubble, the rescue team couldn’t believe what was inside.

The Rigopiano Hotel is a luxury resort in a remote area in the Gran Sasso mountain range. The region is surrounded by forested slopes that gather large masses of snow in winter. This means that the chances of a snow slide is quite high, which puts the Rigopiano Hotel in constant danger.

It started off as a normal day for the staff and guests of the Rigopiano Hotel. Many guests looked forward to plans of enjoying the beautiful scenery outdoors. Others wanted to avoid the cold weather and relax with a cup of hot chocolate by the fire. But nobody could have predicted the deadliest avalanche to hit Italy was about to strike.

Before the avalanche struck the hotel, guests gathered on the ground floor after a series of quivering earthquakes hit the area. They left their belongings in their hotel rooms and prepared for an evacuation. Unfortunately, many of the hotel guests didn’t make it beyond the front doors of the hotel when a huge avalanche struck without warning.

The avalanche weighed around 60,000 tonnes. That number later increased to 120,000 tonnes as the snow grew heavier. Most of the hotel was destroyed upon impact, which made it very difficult for rescue workers to reach those still trapped beneath the rubble. The hotel was buried under four metres of thick snow and ice. This meant that the chances of survival were even more unlikely.

Locals were heartbroken when they heard about the disaster. A base camp was set up in Penne, a small town located six miles from the hotel. Unfortunately, it wasn’t long before the emergency services began to recover the bodies of the deceased from the wreckage. Hopes to find anyone or anything alive began to fade. That is, until five days after the disaster.

During the first few days of the search, the crew pulled nine people out alive. This includes five adults and four children. The survivors were trapped beneath the snow-covered ruins for at least 58 hours. But after the first nine were recovered, things took a turn for the worse.

Time passed by and no more survivors emerged from the scene. People began to lose hope. The heavy snow quickly turned to ice and temperatures continued to drop. The chances of finding any more survivors began to seem more unlikely.

Emergency service workers feared the worst, but they still refused to give up and continued their search day and night. People prayed that those still missing might have been lucky enough to find air pockets beneath the debris. If this was true, then the thick snow might have provided enough insulation to shield them from the freezing temperatures. But sadly, this wasn’t the case.

More than two days passed without another successful rescue. The snow continued to fall and freezing temperatures turned the snow to ice, making the emergency crews job much more difficult. Those who did survive the avalanche were taken to hospital in Pescara. There, they received treatment for injuries related to hypothermia.

Five days after the avalanche hit the hotel, everyone at the scene began to lose hope. Rescuers pulled numerous bodies out of the hotel. And there was no real sign of any more survivors beneath the thick snow. However, on 23rd January, the rescue team decided to try and access the hotel from an alternative angle.

Attempting to access the rubble from this angle was incredibly dangerous. One wrong move and the impact could trigger another heavy avalanche, killing any survivors left inside the wreckage. But if they wanted to help those still trapped inside, they didn’t have a choice.

So, they lifted their drills and shovels and began working into the area. They were extremely careful and everyone held their breath with each movement. They discovered new search zones, but no survivors.

They installed a high-quality radar on the surrounding slopes of the disaster to warn the rescue crew of any fresh slides. Since the snow and rain continued to fall, the chances of a snow slide or avalanche were very high.

It took the rescue team a while to barrel through the levels of thick snow and solid ice. But instead of finding anyone alive, they uncovered yet another body. And with 22 people still missing, the rescue mission became less about finding people alive and more about recovering the bodies buried beneath the thick snow.

It had been five days since the avalanche hit the hotel and two days since someone was found alive. However, once they decided to try and access the wreckage from a different angle, they heard a faint noise coming from beneath the rubble.

The rescue team carefully removed snow from the top of the rubble. They were extremely careful during the rescue to avoid accidentally collapsing the rubble and killing whatever hid inside. They removed pieces of wood, debris and snow until finally, they uncovered what had been making the soft barking sounds.

They rescued three adorable puppies from the wreckage. Their little faces looked terrified but grateful they were finally found. They proved to be quite shy and timid. Because of this, the rescuers took a gentle approach to help the puppies feel safe and relaxed.

The three white Abruzzo sheepdog puppies lifted the spirits of the whole rescue team, who began to lose hope. The puppies survived in air pockets within the collapsed building and snuggled tightly together to keep warm.

Team members from the emergency crew began to carry the cute puppies out from the rubble in their arms. One rescue crew member held the puppy close to his body to help keep it warm. He even gave the puppy a little kiss, who looked very pleased to be receiving all the love and attention.

As it turns out, the puppies were found in an isolated part of the hotel. This, unfortunately, meant that their survival didn’t indicate that anyone else would be found alive inside the hotel ruins. However, the three adorable pups brought a ray of light into an otherwise dark and bleak afternoon.The puppies are less than two months old. Their parents are called Lupo and Nuvola and known as the hotel’s “resident sheepdogs”. Both parents used their instincts to find their way out of the avalanche, but couldn’t locate their puppies at the time.

The firefighters knew they needed to move as fast as possible. However, this was a difficult task in such an uneasy environment. Thankfully, their hard work and dedication paid off when it lead to the discovery of the three innocent puppies. All three puppies are now safely reunited with their parents. They have come to represent a ray of light and hope amid despair. The three puppies tend to stay very close to each other since the avalanche and enjoy lots of warm cuddles from their owners.