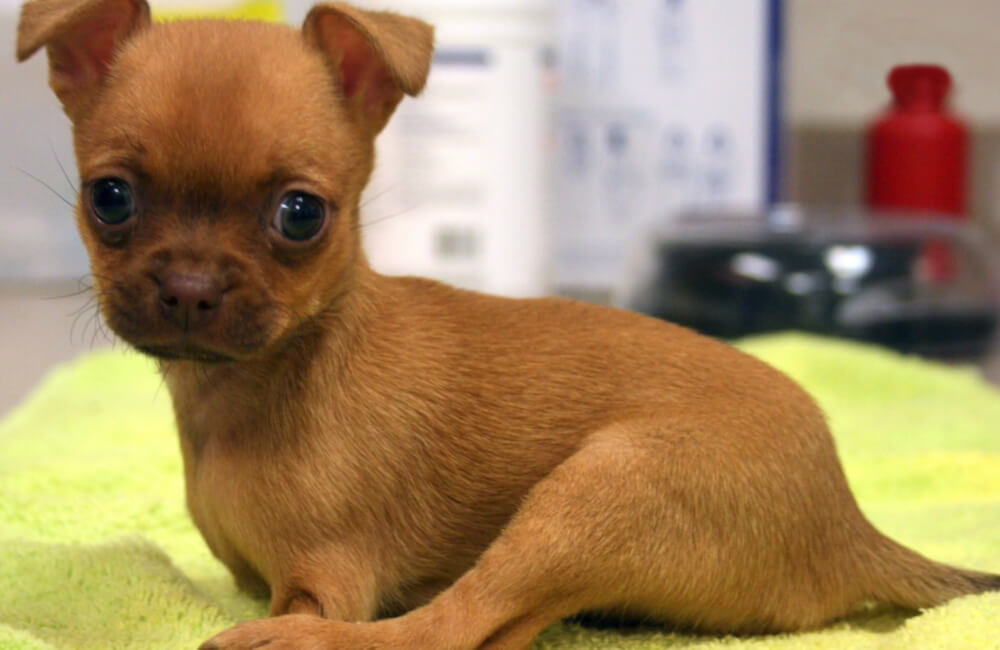 Daffodil the puppy was abandoned in a cardboard box. Perhaps hearing her little cries, someone stepped in and investigated. Thankfully, they picked up the little animal and got her the help that she needed. But there was something unique about Daffodil.

She was born without front legs. Instead of having fully developed forelimbs Daffodil simply has short stumps. And while she’s lively and playful, her legs don’t do everything that she needs them to do.

Daffodil is able to push herself up on her hind legs for a moment. Indeed, she can stand, poised like a bird with her forelegs held up. However, she soon becomes unable to support herself and topples forwards. While she’s full of love and energy, she’s not able to walk.

Perhaps that’s why her original owners discarded her, leaving her out in a cardboard box like trash. She wasn’t perfect – and, as a helpless little puppy, she was doubly vulnerable.

That’s what makes this story so heartbreaking – this poor little animal is utterly adorable, after all. And she’d need a little extra help to make it through. Fortunately, a kind soul intervened on her behalf. After being rescued from the box, Daffodil was taken to the San Francisco SPCA.

Formed in 1868, the SFSPCA has now been protecting animals for close to 150 years. Its founder, James Sloan Hutchinson, was first inspired to protect animals after seeing the cruel treatment of a boar being dragged through the city streets to market. Today, the charity does a great deal to help homeless animals in the area by providing shelter and veterinary facilities, and it even runs a full-service animal hospital in the city.

The organization even succeeded in making San Francisco America’s first “no-kill city.” Animals are treated and released or cared for until a new home can be found for them.

Daffodil hence couldn’t have found herself in better hands. The staff of the SFSPCA were able to offer her the love and specialist care that she needed.

However, they hoped to do more than just look after her and tend to her needs. In fact, they had a plan that would get the disabled doggy up on her feet.

The process began with wrapping the little pooch up in cellophane. This was just to protect her little body, though, and there was much more to follow.

Next would come a cast that would cover almost her entire body, as the veterinary gently wrapped her in bandages. And it made her look just a little like an adorable puppy burrito.

Once Daffodil was bandaged up, the cast would be marked up with where holes would go to allow room for her legs to pop through. And while all this was going on, the little puppy didn’t wriggle or complain for a moment.

In fact, one of her carers got a lick on the nose, as if the little puppy knew the good work that the team were doing for her. And then it was time for the cast to come off.

Next, Daffodil got measured up. It’s hard to imagine that she knew quite what to expect, though. And what the SFSPCA team were building would transform her little life.

Two weeks later, the team’s work came to fruition. Daffodil had a brand new set of wheels that would take the place of her front legs.

The cast, meanwhile, would sit between Daffodil and the wheel structure, ensuring that it was a comfortable fit for her body and that it didn’t rub. In effect, it was a tiny walking frame for the puppy – who could now skate around.

While a prosthetic leg would be an outside possibility for a dog, putting Daffodil on wheels meant that the support could be easily upgraded as she grew. That would ensure that Daffodil wouldn’t have to pause for a moment.

And the little dog was thrilled with her wheels. She was zipping around the space and pouncing on cuddly toys. What’s more, she quickly learned how to put her feet up on the frame in order to coast on the momentum of the wheels.

She even learned how to prop herself up on her wheels to reach higher. And while she might sometimes tip over, the SFSPCA staff were there to right her.

But Daffodil wouldn’t be at the animal shelter for long. Indeed, she was soon adopted and would be on her way to her forever home with her new owners.

In her new home, Daffodil would receive the love and attention that she needed – and her new owners would support her as she grew up. And, in future, she might be fitted with a full set of prosthetics to have her bouncing about on four legs rather than charging along with her frame.

In the meantime, she’s clearly an active little animal, and is set for a whole range of adventures on her wheels. Indeed, she couldn’t look happier.