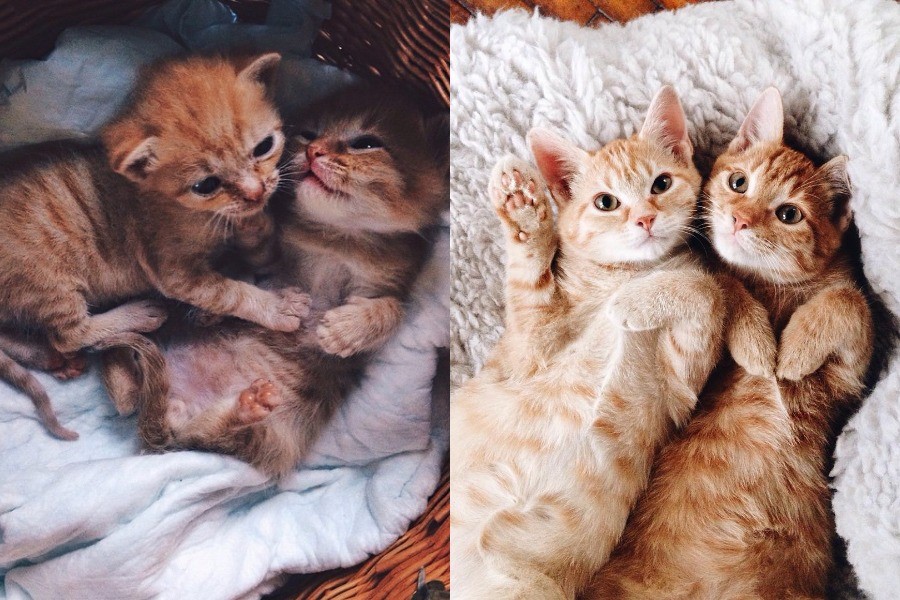 When a pair of poor, abandoned kittens turned up in the garden of a country home, their situation seemed dire. After all, they were completely alone, and certainly had no way of fending for themselves. But mercifully, these two adorable brothers were about to find that their luck would soon change. And it was all down to the caring nature of a young woman from Moscow.

Meet Anya Yukhtina, a producer and event manager for Condé Nast who lives in Moscow, Russia. Anya loves animals, as her Instagram profile proves. Indeed, it’s obvious from her photos that she’s not only a cat person, but has time for all creatures great and small.

Back in 2015, Anya’s friend’s father was taking a stroll in the grounds of his country home, when something caught his eye. Indeed, he’d discovered a pair of seemingly abandoned ginger kittens. Lost and alone, the frightened felines were in serious danger. And of course, he didn’t know what to do.

Yet, considering Anya’s obvious reputation regarding animals, it was no surprise that he thought of her. And eventually, he realized that the best thing to do was offer the kittens to Anya, in the hope that she might be able to give them the home they so sorely needed.

When he first brought the kittens to Anya, they were absolutely tiny. Indeed, she estimated that they must only have been around 10 days old. But Anya, ever the animal-lover, didn’t hesitate to welcome them into her life. She even gave them adorable names, Fatty and Skinny.

Usually, kittens as young as Fatty and Skinny require feeding from their mom. Indeed, they’re extraordinarily dependent creatures, but that’s arguably no surprise considering how tiny they are. After all, human babies aren’t exactly self-sufficient.

And so, if Anya was going to look after the kittens, she would need to give them round-the-clock attention to ensure they survived and grew. For a start, Fatty and Skinny would need feeding every two to four hours. It was a demanding schedule, but one that Anya faced head on.

Indeed, she refused to waver from the challenge, and decided that there was nothing else for it. After all, if she didn’t raise the kittens, then who would? Without a mother, they would be left to face the harsh realities of the world, and likely wouldn’t survive much longer.

That early stage of the kittens’ lives wasn’t without its own complications, however. Indeed, at just three weeks old, both cats came down with an illness. And it turned out that they both had ringworm, an infection common among kittens due to their weaker immune systems.

A rigorous treatment process was required to nurse the kittens back to health, then. Both brothers needed regular medicine shots, and had to be washed every two days. Indeed, it seems raising kittens is no picnic, but Anya wouldn’t be deterred.

And, thanks to her love and care, both kittens eventually made a full recovery, and began to settle into their new home. By now, they were truly becoming a part of Anya’s family, settling into what would be their permanent home.

What’s more, the laborious feeding process also eased up sooner than expected. While kittens typically require their mother’s milk for as much as the first eight weeks, Anya managed to teach Fatty and Skinny to eat by themselves after just a month.

By now, then, the gorgeous ginger pair were beginning to feel well and truly at peace in their new home. But as much as they’d settled in, they still refused to leave one another’s sides. All they had had in the first few days of their lives was each other, after all – so it made sense that they would have formed such a special bond.

All the while, Anya made sure to document the kittens’ progress on Instagram, where she has a massive following. In fact, more than 35,000 people keep up to date with the antics of Fatty and Skinny. And it’s fair to say that each and every one of those has had their heart stolen by the adorable antics of these cats.

After all, whether it’s helping out in the kitchen, taking a selfie or helping to decorate the Christmas tree, there’s nothing these cats won’t do together. And Anya captures it all on camera – indeed, there’s seemingly no hiding from her lens.

Anya says the pair really are inseparable. “They are always together!” She told Bored Panda. “They sleep and eat together.” It’s no surprise, of course – they’re brothers, after all, and like any good siblings, they’re always looking out for one another.

However, Fatty and Skinny have a naughty side too. Indeed, one of the other things they always do together is stealing food from the kitchen table, according to Anya. Yes, it appears that the cunning cats really are the purr-fect partners in crime.

Fast forward to the present day, and the fortunate felines have made a remarkable transformation from that day they were first found in the garden, lost and alone. Indeed, they’re now both perfectly healthy cats, enjoying their lives with Anya.

And despite the fact that they’re no longer kittens, the crazy pair somehow just get more adorable by the day. Then again, maybe it has something to do with the fact that Anya has given them their own teddy bears. Even the coldest of hearts would melt at the sight of photos like the one above.

Of course, Anya didn’t stop taking photos of the cats when they grew up. Indeed, she’s kept their legions of fans updated on Instagram, and will surely continue to do so as they embark upon more crazy adventures. And while she admits that just like any brothers, the cats sometimes fight, it never lasts – and they’re quickly purring away in each other’s company again.

Some photos of the pair have reached over 10,000 likes on Instagram, like the one above, where they’re snuggled in bed watching television on a laptop. It’s no wonder, though – after all, it doesn’t get much more adorable than this.

Watching these beautiful baby kittens grow up, unable to leave each other’s sides, is absolutely amazing to see. And their journey, of course, is really only just beginning. Indeed, we’re sure that Fatty and Skinny, alongside Anya, have plenty more zany adventures awaiting them in future. And we can’t wait to see them.