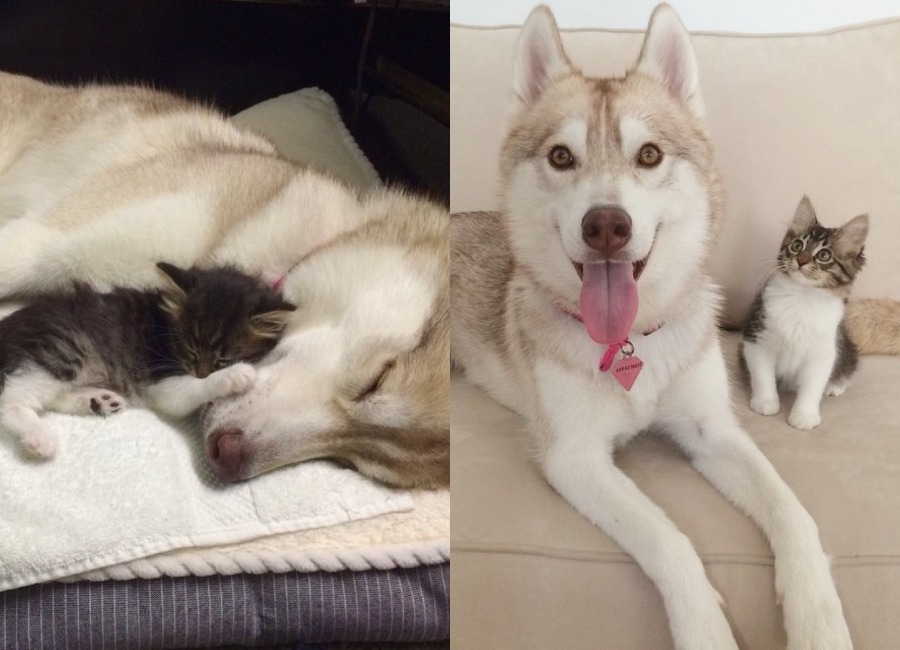 When a group of sisters discovered a poor, homeless kitten on the brink of death, they had to do everything they could to save it. And with time of the essence, they took a serious gamble on a rather unorthodox solution. But nobody could have predicted what would happen next.

Sisters Thoa, Thi and Tram Bui live in San Jose, California. And in 2015, they stumbled across a kitten, lost and living on the streets at only three weeks old. At first, she seemed to at least be in general good health, if a little weak. But then, her condition rapidly deteriorated.

Indeed, the fragile feline refused to eat any food that the sisters gave her, and eventually couldn’t even lift her head up. Her eyes, meanwhile, had become infected, and she quickly lost the ability to even open them properly. She was malnourished and dying – and they didn’t know what to do.

But the sisters couldn’t just leave her to die. And so, they had to act fast to save her life – which meant turning to a radical solution. Taking a huge gamble, they decided to place her in the care of the only animal who might stand a chance at taking care of her – their husky dog, Lilo.

Lilo is one of three Siberian Huskies owned by the trio of sisters, with the other two named Infinity and Miko. In fact, Lilo is the leader of the pack, which made her at least a sensible choice in the context of their other pets when it came to taking care of the kitten.

However, Lilo had been neutered only a week before the sisters found the kitten, who they’d decided to name Rosie. And without even any puppies of her own, they had no idea whether the risk they were taking would work. After all, would Lilo even have any maternal instincts?

But, against all the odds, Lilo ended up saving little Rosie’s life. Indeed, Thoa Bui told ABC, “Lilo never left Rosie’s side for hours. She cuddled and comforted her until she was better and ready to finally drink from a bottle.”

In fact, the kitten even tried to “suckle” from Lilo at one point, as if she was the husky’s own pup. Indeed, on that perilous day in 2015, a real mother-daughter bond was forged between the unlikely pair.

And just like any daughter, Rosie quickly looked to her “mom” for guidance. Indeed, she soon began following Lilo around, mimicking her actions and taking after her in all the ways you’d never expect a cat to.

As a result, Rosie has grown up practically thinking she’s a husky dog. And it’s no surprise – after all, the pair do almost everything together, including sleeping. Indeed, they’re basically inseparable at this point.

It was truly incredible for the sisters to see how Rosie learned from the huskies – not just Lilo, but Infinity and Miko too. You might even say she’s part of the family now. So when the dogs went outside to do their business, Rosie followed and did hers too.

In fact, when the huskies were put on leads to go for a walk, Rosie’s face was a true tale of sadness at missing out. And so, one of the sisters suggested bringing Rosie along. “I was like, you’re crazy, we’re going to look ridiculous,” Bui told Buzzfeed.

Nevertheless, the trio decided that there was nothing else for it, and with that, they began taking Rosie on walks with the huskies – even putting her on a lead. And of course, Rosie couldn’t get enough. So even though Bui admits that sometimes, they do look a little mad walking their cat, they don’t really mind.

Indeed, Rosie and Lilo have formed such a strong bond that they even sleep together at night. And Rosie has apparently gotten into the habit of helping her adoptive mother steal dog food when the sisters aren’t paying attention.

Even when she was a kitten, Rosie wanted nothing other than to be able to keep up with her husky friends. Sadly, however, it was almost inevitable that she was just too tiny to be able to do so. After all, the size difference between a kitten and a husky dog is enormous.

Of course, that didn’t stop her from trying. Indeed, Rosie play wrestled with Lilo, and ran as fast as her tiny legs could carry her, in order to have any hope of keeping up with her canine companions.

Sometimes, however, it all proved too much for the fearless feline – so their owners had to separate them, just to give Rosie a break from all the effort she was putting in to keep up. After all, the animals couldn’t really appreciate the difference in their stature, so Lilo was often in danger of accidentally hurting Rosie.

Every time they were separated, Rosie and Lilo howled endlessly, until the sisters relented and allowed them to reunite once more. “Lilo lays by the door where Rosie is, and Rosie lies on the other side and they both whine and cry like Romeo and Juliet,” Bui told the Daily Mail.

And when the pair finally do find their way back to each other, they understandably get incredibly excited. Indeed, Rosie and Lilo apparently always stay close to one another – they “can’t not be touching,” says Bui.

It’s probably no surprise that Rosie often gets caught up in the excitement, and thinks that she actually is a husky. After all, she’s taken on so many of Lilo’s traits that she may as well be. She isn’t afraid of water, for instance, and even went kayaking with the sisters and their dogs. Of course, it probably doesn’t help when they dress her up in a husky costume, either.

With Rosie well and truly full of life, the Bui sisters now take on foster kittens and other animals. And of course, Rosie is there to help take care of them, just like Lilo cared for her in her moment of need.

Since Rosie made her way back to full health, she now lives with the sisters’ cousin. But as they all live next door to one another in California, the animals are never really too far apart. Indeed, the adorable Rosie still goes on plenty of walks and trips with her best friends. Who says cats and dogs are natural enemies?