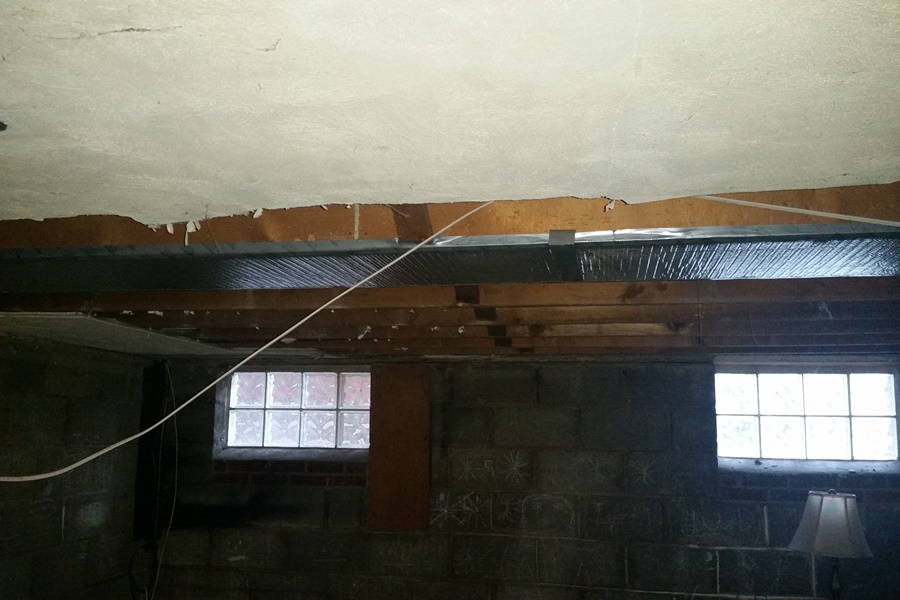 A young couple bought a house built in the 1940’s. When they started remodeling the basement, they made a shocking discovery.

From what the couple knew, the house was built in the late 1940’s and had multiple owners over the last couple of decades.

The current owners started remodeling the house by themselves, bit by bit.

Once they finished working on the first and second floors, they switched their attention to the basement.

The basement had never been reconditioned by previous owners, so it was in pretty bad shape. Truth be told, the current owners didn’t have enough money for a complete overhaul.

They decided to get it cleaned up first and make it look the best it possibly could, without spending money on a costly full-blown renovation and fancy decorations.

“I am a 35 years old do-it-yourselfer, so I had remodeled everything on the first and second floors when it came time to remodel the basement,” the current owner said.

They got to work and started by slowly peeling the walls back to the bare rock, exposing some strange writings and drawings.

To their surprise, they found swastikas scratched onto the walls – an indication that the original owners might have been Nazi supporters.

But this wasn’t the most startling discovery they made in the basement. There was more.

They took the remodeling further and started removing the basement ceiling.

“There was a good 1/4 inch of dust on the ceiling. We put up plastic to keep the dust out of the rest of the house, then we exposed and patched the air returns first,” the current owner explained.

They started taking the ceiling down in one of the basement’s corners.

Much to their stupefaction, they discovered a box hidden next to a pipe.

Their hearts started racing, their palms got all clammy and sweaty.

The couple’s anticipation was growing with every waking second. They were scared stiff of what they might find inside the box.

The box was easy to lift and move, but it didn’t seem empty. There was definitely something in it.

The couple decided to take it outside and open it up.

They kept waddling around it, praying not to find anything gruesome inside.

“We took the box outside. It had something inside, but nothing heavy like coins or gold bars. I thought I might get lucky, though,” one of the owners recalled.

The couple expected to come across some old recipes or a bunch of other vintage items.

“We were starting to guess a lot at this point. My wife thought we would find some old recipes, I thought we might discover some vintage sports cards.”

They finally mustered the courage to look inside the box and discovered an old newspaper.

They examined it carefully and found that, apart from the fact that it was indeed old, there was nothing special about it.

It might have been placed in the box to help preserve some other items of greater significance or value.

The newspaper was dated March 25, 1951, which indicated that the box was hidden in the basement ceiling by the original owner of the house.

“The date on the newspaper must be near the time the box was hidden,” the owners said.

Underneath the newspaper, the couple found a strange package wrapped in what looked like wax paper.

They ripped the wrapping paper up to discover three smaller packages.

At this point, the couple started to flip out.

They were convinced someone was playing a cruel practical joke on them and they even started looking for hidden cameras around the house.

“We were freaking out. This doesn’t happen to us! What do we do? Where are the cameras?”

“We didn’t get a picture opening each package, our excitement overwhelmed us,” the couple admitted.

“We spent hours making an inventory of everything we found in the box. We decided that we needed to have the special bills appraised and talk to a lawyer about how to proceed.”

All the banknotes found in the box were from 1928-1934. Some of them were very rare – a couple of brown notes, a gold certificate and some star bills.

“This was a wild ride for us. We are boring people and have been dumping our extra money to pay off our mortgage and that is where this money will go too,” the couple said.

Once they decided what they were going to do with the money, the couple went on with their lives.

But their luck did not run out then and there. Little did they know that there was another hidden treasure in their basement.

One day, when his wife was at work, the man of the house went down to the basement to continue working on the ceiling.

He couldn’t believe his eyes when he found a second box, identical to the first one, hidden in a similar way.

He called his wife immediately and tried to keep himself busy until she got back home.

He set the box aside and finished tearing down the ceiling. He had to know if this second box was the last one hidden out there. And it was, indeed.

He dusted off the box and waited for his wife to return.

“I sat and stared at it, and cleaned my precious for hours while waiting for my wife to get home,” the man said.

When they finally opened the second box, hours later, they found another newspaper on top. It was from the same year, 1951.

The second box was completely stacked with 20-dollar bills. This time around, the couple pulled themselves together at once and contacted an estate lawyer about the legal aspects.

Upon investigating the matter closely, they found out that the original owner of the house had died in the 1960’s and had no descendants. So, all the money hidden in the basement ceiling was legally theirs.

“All the money is in the bank and will be paid toward our mortgage, minus taxes. We seriously had to make an appointment and sit there and watch them count it all out. It was great fun,” the couple said.

Thanks to the hidden treasures in their basement ceiling, the couple’s mortgage will be entirely paid off by next year.

They believe everyone reaps what they sow: “We are generally good people. We try to help others when we can. Acts of kindness go a long way.”