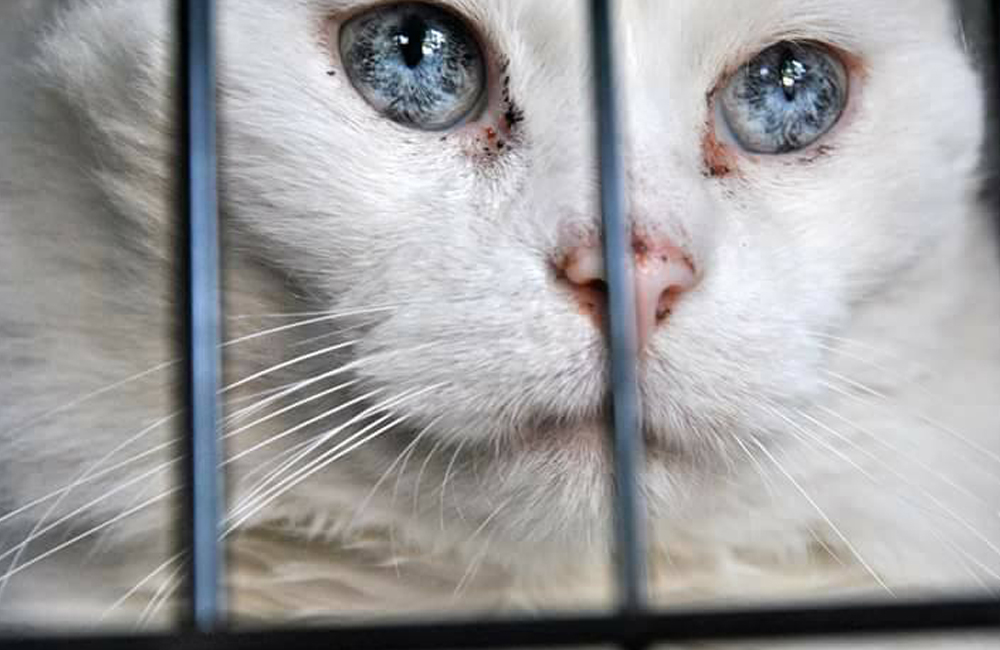 In February 2016, on a routine trap, neuter and return mission, cat rescuer Joni Nelson thought she’d found just another lonely stray prowling the streets of Boston. But there was something different about this fluffy white feline. Something desperate, urgent and far from routine.

Initially, the plan was to check the cat out, neuter him and return him to his feral colony. However, on closer inspection, he didn’t look like he’d survive much longer on his own. In fact, he looked broken. His ears were scarred and covered in blood, his eyes were glassy and he could barely even lift his head.

The cat was first spotted by a local woman named Molly, who saw him near her apartment, fed him and called Boston’s Forgotten Felines, a non-profit organization founded by Nelson in 2015. Straight away, Nelson, who has been rescuing cats for more than 30 years, knew this was a special case. This cat was in dire need of an intervention. In fact, he needed a miracle.

On top of his head wounds, the troubled cat also had what Nelson describes as “goopy” eyes – as well as a series of other problems. Still, the biggest obstacle Nelson had to overcome was the cat’s “nasty attitude.” As soon as she got anywhere near him, he hissed and spat like a wounded wild animal low on trust.

Still, Nelson persevered and took him in. She named him Coconut and transferred him to a small cage. Soon, Nelson discovered that her new feline friend had a urinary tract infection, an upper respiratory infection and a bad limp.

Coconut was filthy when Nelson found him, and in addition to his physical injuries, he also had ear mites, chronic diarrhoea and a short, explosive fuse. He also tested positive for the feline immunodeficiency virus. Still, it was his perceived nastiness that made “him hard to like,” says Nelson.

Spurring into action, Nelson started Coconut on a daily medication schedule, and eventually, his upper respiratory infection began to subside. Still, Coconut was aggressive and unapproachable. “He was very difficult to feed,” explains Nelson.

Sadly, Coconut still wouldn’t look up when Nelson approached him, but he “sure would lash out” whenever she opened the cage. As a result, it was difficult for Nelson to clean Coconut’s cage as well, and she struggled to really make a connection with him. But she wasn’t about to give up yet.

After a while, Nelson began to suspect that Coconut was blind. “He never lifted… his head all the way, always looking down,” she says. “He never bothered to clean himself and I sure couldn’t touch him to clean out his eyes. I knew for sure he couldn’t go back on the streets to live like that.”

Still, Coconut went ballistic as soon Nelson, or anyone else, approached him. Lashing out and hissing like crazy, no doubt in perceived self-defence after so many years roughing it out on the streets. Then eventually, after months of gentle tenderness and coercion, baby steps, Coconut was transferred to a larger cage and he began to calm down.

“It took a long time to get him to let me touch him,” says Nelson. “First just his head and only for a second or two. Finally he let me clean his eyes.” By this stage, Nelson could clean Coconut’s box out and put food down for him without being attacked.

“He craves attention, cries to have his head rubbed. I still use caution… dealing with him, no sudden moves. But I can clean his cage, replace his bedding and feed him… no problem. All he wants is to be petted,” says Nelson.

However, when Coconut landed two “very deep” bites, Nelson realised he must be deaf as well and could probably just see shadows. “No wonder he was so nasty,” says Nelson. “He was frightened and no one knows the torture he went through living on the streets for so long in that condition.”

Fortunately, just as it seemed like Nelson and Coconut had reached a standoff, a kind volunteer named Sherri Deluca, who couldn’t bear the thought of Coconut being put down either, stepped up and gave him a temporary new home.

According to Nelson, it was tough going for Deluca. “Other people would have given up. But she did it. She has her battle scars to prove it but she never gave up on him.” Slowly, Coconut began to trust again. And his progress “absolutely amazed” Deluca.

After a few months, Coconut was taken in by a second temporary foster carer, Ashley Ward. And at this stage, Nelson admits she was scared he might sneak back into his shell, and “go back to being frightened and mean with strangers.” Luckily, after a night spent hiding under a bed at Ward’s house, Coconut was ready to begin again.

According to Nelson, Ward was “very kind and understanding with him and he loves the attention. He purrs up a storm when being loved. He sleeps with her and cuddles.” Speaking to website The Dodo, Ward said, “Coconut is really a sweetheart. Every time I walk into the room he hobbles over to me to get pets… He will curl up right next to your side and snuggle his head under your arm.”

It’s a beautiful thought, really, that all it takes is a few months of unconditional love, patience and trust, and even the most broken and hopeless-seeming creature can be transformed and brought back from the brink. In Coconut’s case, it’s even more remarkable because he seemed like such a write-off when Nelson found him. Even her friends and peers were telling her to put him down and give up, but she refused.

Looking at recent photos, Coconut looks like a new cat. His physical recovery is one thing, but his emotional and mental rebirth is the real miracle. His ability to forget whatever he went through and just start trusting people again. “It’s amazing what love, patience, security and kindness can do for a kitty like Coconut,” says Boston’s Forgotten Felines volunteer Danapel C. de Veer, also speaking to The Dodo.

However, despite his remarkable transformation, Coconut still needed a forever home. Somewhere to call his own. Finally, in June 2017, he was adopted by a kind local woman named Robin and he couldn’t be happier and more loved.

“He takes time to trust. His guard is always up but he just wants to be loved,” says Deluca, speaking to website Love Meow. “He has come so far and I am so excited and happy for him.” Coconut’s story is a touchingly powerful tale of love and redemption, and we all need a bit of good news these days.