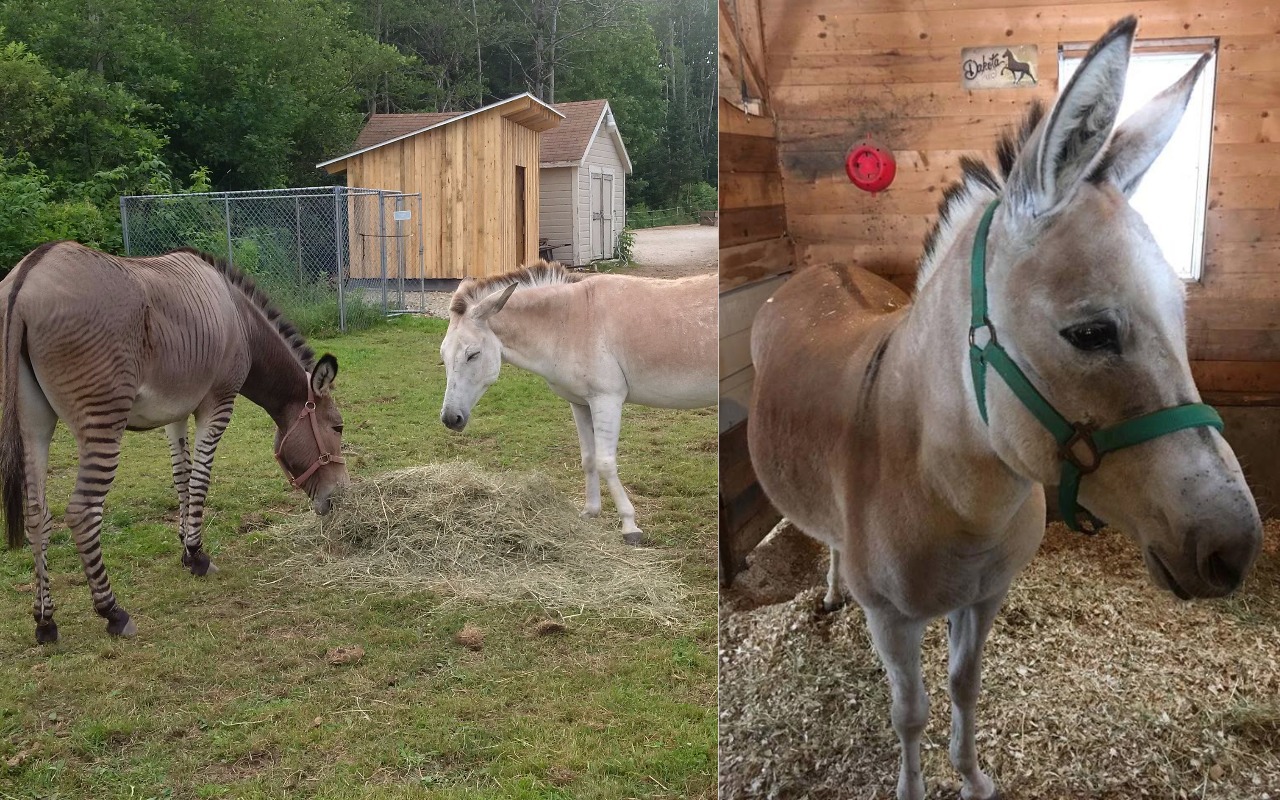 After nine years in captivity at a petting zoo, Zonk the zonkey looked destined for the slaughterhouse. Indeed, it seemed like nobody wanted to purchase the poor hybrid. Until, that is, an anonymous bidder not only plumped up the cash to adopt Zonk, but went one step further – and found him a forever home that would change his life.

Zonk is a type of zebroid, the collective term for any cross between a zebra and another equine animal. The sire (male) half of the equation is usually a zebra stallion, although there are rare cases where the opposite has been true. For instance, a donkra is a hybrid resulting from a female zebra and a male donkey.

Zebroids have been recorded as early as the 19th century. And unsurprisingly, the effects of breeding a zebra with another equine animal – something that doesn’t occur naturally in the wild – aren’t entirely without consequence. In fact, the hybrid offspring is usually infertile, and may even suffer from dwarfism.

If you’ve never heard of zebroids before, you may be surprised to hear just how common they are. Indeed, Charles Darwin even wrote about four different kinds of zebroids in his Origin of Species. And zonies – zebras crossed with ponies – were used as transport animals in the South African War.

And of course, zebroids are still around today. But as zoos have moved further towards conservation, they’ve become increasingly rare – to the point that one zonkey, adorably named Zonk, had never met another of his kind, having spent the first nine years of his life in a petting zoo. There, he was the star attraction, nicknamed “Zonkzilla.”

Eventually, however, the petting zoo decided to replenish the animals it held, and that meant replacing Zonk. The poor zonkey was consequently put up for auction, but found little interest from prospective buyers. And so, he inevitably ended up being dragged from one auction to the next.

It seemed, then, that nobody wanted Zonk, unique as he was. And for a while, it looked like he was destined not for freedom, but for the slaughterhouse. Indeed, he could easily have ended up being sold to a “kill buyer” in Canada, who would have purchased Zonk simply to slaughter him.

Thankfully, it turned out that a woman from Pennsylvania had been tracking Zonk’s story online, and finally reached out to purchase him. And while the long-suffering animal didn’t know it yet, he had in fact just been saved from potential death by this anonymous bidder.

Indeed, the woman actually took Zonk in and nurtured him back to full strength. But she wasn’t intending to keep him forever. No, she actually had a far greater plan in mind for Zonk – one that would make him happier than he’d ever been in the petting zoo.

Once Zonk was healthy again, the woman reached out to the Integrity’s Haven Equine Rescue in Nova Scotia. Owned and operated by Angela Welburn, the rescue centre was one of the few that had its very own zonkey already.

In fact, the rescue zonkey owned by Welburn was a female, named Zelda. And of course, Welburn happily accepted Zonk’s new owner’s offer. The next step, then, was transporting Zonk all the way from Pennsylvania to Canada.

Once Zonk had received clearance from his vets, he was loaded up and driven the 1,036 miles from Pennsylvania to Nova Scotia – a journey that took a whopping 16 hours in total. But finally, Zonk had arrived at his new forever home.

It had been quite the ordeal for Zonk, and it had certainly cost his anonymous American buyer a pretty penny – $10,000, in fact, in vet bills, travel and housing fees. But Zonk’s new life was really only just beginning – and the best was yet to come.

Still, it took Zonk a while to adjust to his new home. Indeed, Welburn says that at first, he was evidently not happy: “When he first showed up, his ears were constantly pinned, sad and perhaps even angry looking,” she told The Dodo.

The solution? Introducing Zonk to Zelda. The female zonkey, four years his junior, had endured a similar ordeal to Zonk, having been rescued at the last minute from being taken to Canada to be slaughtered. Instead, a Nova Scotian woman had paid the $800 necessary to bring her to Integrity’s Haven.

And Zelda seemed to be exactly what the doctor ordered, as far as Zonk’s mood was concerned. Indeed, upon meeting his new friend, he instantly perked up, and it seemed like the pair quickly began to form a genuine bond.

Despite both being born to male zebras and female donkeys, as are most zonkeys, Zelda doesn’t bear the same quintessential stripes that cover Zonk’s body. Instead, she has a white and blonde coat – but that didn’t stop Zonk taking to her straight away.

In fact, it took only a week for Zonk’s mood and even personality to completely transform. “Now his ears are up, and he’s playing, running and kicking up his heels, and always looking for treats,” Welburn told The Dodo.

Now that he’s settled in properly, Zonk has even been getting up to mischief with his new partner in crime. According to Welburn, they’re constantly trying to sneak into new places and buildings, while Zonk also tries to steal objects to play with.

The two adorable animals now spend basically every waking moment together, and they’re no less inseparable when sleeping, either. In their stalls, they lie down together – outside, one lies down while the other stands guard.

Of course, seeing Zonk and Zelda act so brilliantly with – and around – each other has inspired Welburn, too. “People think I rescue animals from being put down, and it’s true, I do,” she told The Dodo. “But these absolutely wonderful, courageous, smart animals keep me going.”

There’s no denying that it’s been a long, rocky road for Zonk. While his first nine years in the petting zoo likely weren’t the worst fate this plucky zebroid could have faced, the year between his being released from there and arriving at Integrity’s Haven must have seemed insurmountable at times. Now, though, Zonk’s life has been absolutely transformed, all thanks to a handful of very special ladies – including, of course, Zelda.