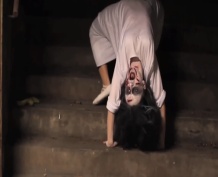 As the scary clown phenomenon still rattles everyone across the globe, so does the epitome of horror circulating around our once peaceful neighborhoods. While we begin our countdown for the many halloween events and parties we mark our calendars with, there are several things we may need to consider when out and about during Halloween night, and that’s the increased number of scary pranks on the rise wherever we go.

Most of these friendly pranks are funny, but there are some that are quite extreme and severely creepy. Some are even heinously crazy that would probably cause you to go through some major therapy afterwards. But nonetheless, to be wary of what to expect this coming halloween, here are our list of the most scariest pranks you should be on a lookout for on Halloween Night.

20 Scariest Halloween Pranks of All Time

This is an original japanese prank, that has gone viral in the internet. A suitcase with a black wig is placed in the women’s bathroom, while a ghost hides behind a cubicle ready to scare anyone who enters. This is one of the best pranks circulating in the internet that would definitely knock you off your pants.

A bathroom mirror cracks severely from the inside as a head of a what seems to look like a mannequin doll appears on the center. This is one scare that will put your nerve wracking cells to a test.

One hilarious prank that has gone viral in Brazil, is the ghost in the train at São Paulo subway. There are only a few people left on the train as it stopped abruptly and out of nowhere a creepy ghost appears on the train and starts scaring everyone.
4. Suicide Girl Prank
https://www.youtube.com/watch?v=lj3uWbeHzXQ

How would you feel when a woman commits suicide in front of you? Freaky right? What’s more terrifying is when this woman gets up and floats in mid air after having seen jumping off a bridge. Woah!

I wouldn’t even dare go near a place where a chainsaw is being used. This prank went viral in the internet like crazy. A man holding a chainsaw slices up a guy in half and begins to chase anyone witnessing it. Now that’s some scary sh*t!

So if the kid in the movie Exorcist, spider walking down the stairs didn’t scare you, how would you feel if you see not only one kid but 20 more creepy kids spider walking towards you?

Elevators today are made sure by construction companies that they’re safe for everyone, but not on Halloween Night. You just couldn’t predict who you’d bump into the elevator; your teacher, an old friend, or maybe a ghost child?
8. The Curse of Chucky Prank
https://www.youtube.com/watch?v=6OcRgGMUUeA

Horror movie fans sure liked the Child’s Play movie saga during the 90’s, but will they like it if Chucky, the Killer doll comes to life on a random subway and starts stabbing people with his knife?

This was one of the best and original episodes of Scare Tactics TV show, back in the days. A PETA worker gets pranked by his friends, making him believe that they are in a laboratory where scientists experiments on combining human and animal DNA, later to find out that there’s a Giant Rat on the lose in the place.

Yet, another elevator prank, where we meet random creatures in the elevator. This time it’s an alien monster that will scare you off your pants!

So you are trapped inside a train when the zombie apocalypse hit the earth. How will you survive without any weapons or any means of self defense?

What would you do if a creepy looking kid suddenly approaches you in the middle of the night? To make the situation more eerie, the girl seems to be humming a very faint funeral song. If you walk away from “it”, it follows you. What would you do?

This is where it all begun. The scary clown phenomenon is brought to you originally by DM Pranks, when their video of clowns roaming around the streets with their ax, bats,a bloody chainsaws scaring people the night before Halloween. Pranks like these never fail to give an effective scare on people and maybe that’s why no matter how cliche clown scares are, they never get old.
14. Paranormal Activity Prank

If you’re looking for a new house to stay in the coming months, watch out for those houses where paranormal activity is firmly present. You might just possibly close a deal on the house of the devil.

If you’re sure that the deranged mad man killer, Jason has died in the movie. Friday the 13th, think again! He could actually be anywhere. He could be in your school, your neighbor’s shed or at the park.

Be careful who you lend your help to as some individuals doesn’t really appear what they seem. This video is one of the scariest prank that people wouldn’t want to experience first hand.

How would you react if you see a little girl all drenched in blood, in the middle of nowhere eating a dead body on the ground and attacks you the moment you walk pass her? This is one awesome prank you can’t dare miss watching.

We just couldn’t get enough of the demon spider walk pranks! It’s just too scary to be true.

When a baby carriage is left alone in the park, our human instincts would definitely consider helping out by taking the carriage and tending the baby inside it. But what if it’s not a demon baby? Would you still dare help?

What’s worse than one ghost girl? is two ghost sisters and they’ll stop at nothing to get you. This prank has terrified masses irrevocably, you’ll change your mind of going out this Halloween night.