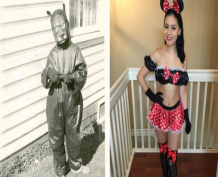 Gone are the days where Halloween used to be just one favorite holiday where kids anticipate to go trick or treatin’, where moms shop to nearby department stores a day before Halloween night, looking for silly costumes for their children to wear, where dads would go cut off two  eye holes on a used white blanket so Little Billy could have a costume to go trick or treating since nothing in the store fits him, where teenagers enjoy a friendly ghost hunt in a nearby cemetery and tell scary stories to each other along the way.

As we advanced into today’s late 21st Century lifestyle, when we think of Halloween, we think of teenagers planning their costumes a month before as they want to look their best for a Halloween Party, High school girls competing for the best dressed award by making sure their dresses are skimpy enough to get everybody’s attention, boys trying to get pissed drunk on Halloween Night, and everyone deciding which rave parties they are attending tonight for some WILD EXPLICIT FUN. How did we even come to this? Can we still feel the essence of Halloween today? Here are some comparisons how Halloween has changed throughout the years, from Scary costumes to silly costumes, and from silly costumes to sexy ones. 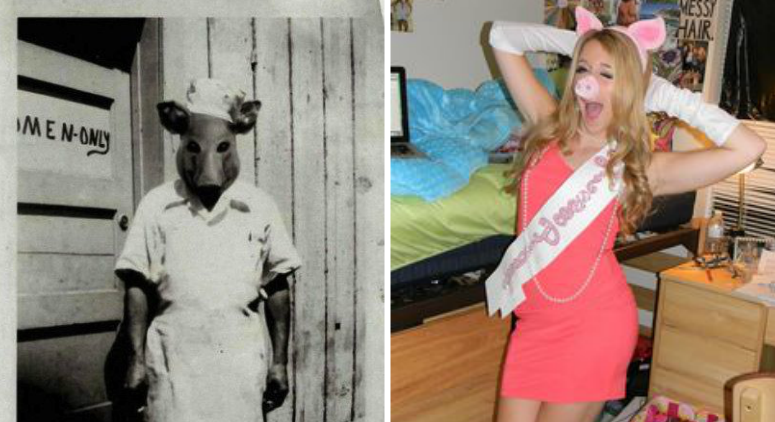 When little Miss Piggy went to the market in the 60’s, they ended up scaring all the people in the place. Where as when Little Miss Piggy of today went out, she went straight to a beauty pageant and partied all night long.

2. Couple In Costume Poses for a Picture in the 60’s Vs. Millennial Couple Shots Today 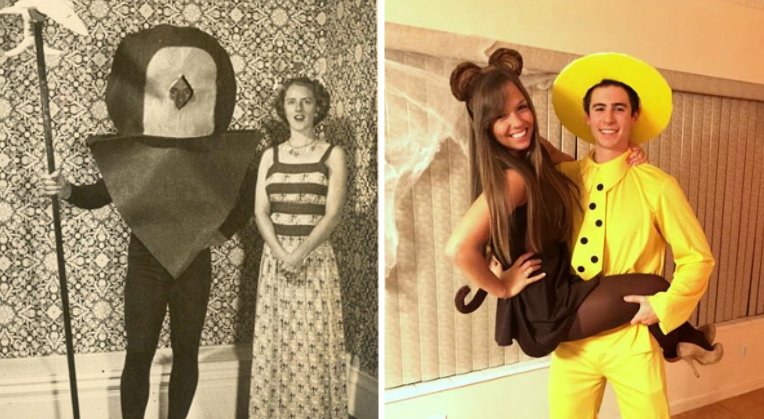 Apparently in the old days, couples also dress up and pose decently on pictures during Halloweens. Today however, some couples having their pictures taken on the camera with their silly costumes are more likely to pose vulgar to prove that they’re having fun. 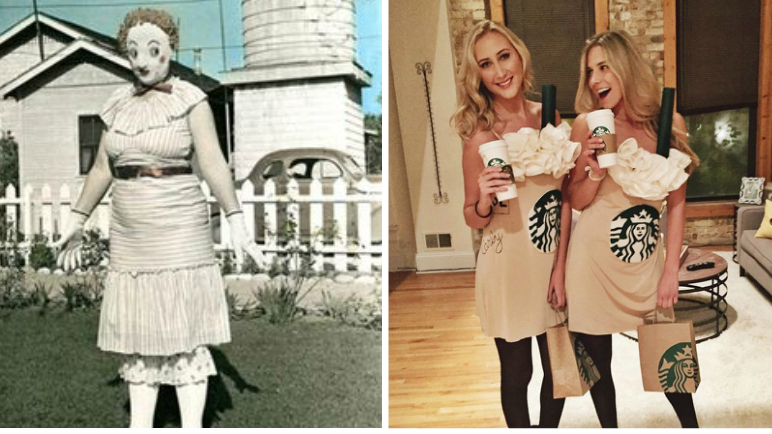 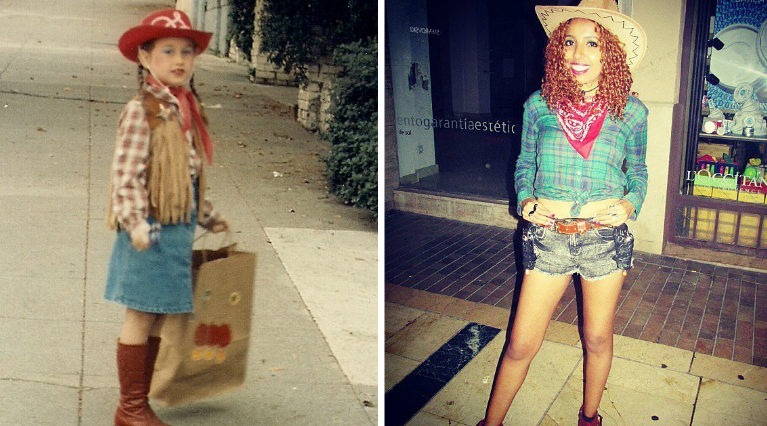 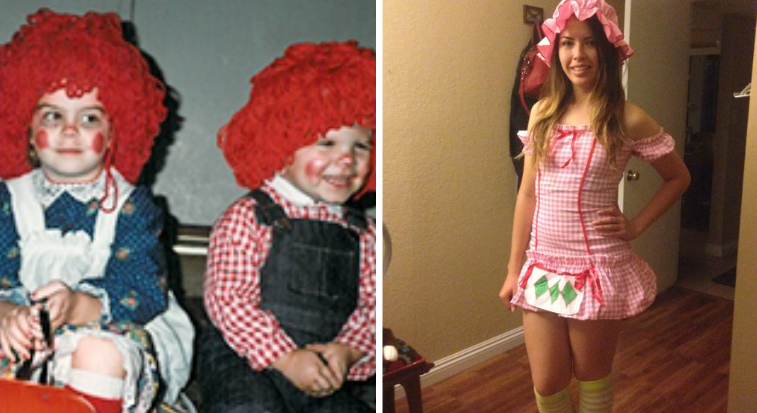 I  really don’t remember strawberry short cake showing some skin in a  really short mini skirt and having blonde hair, can you? 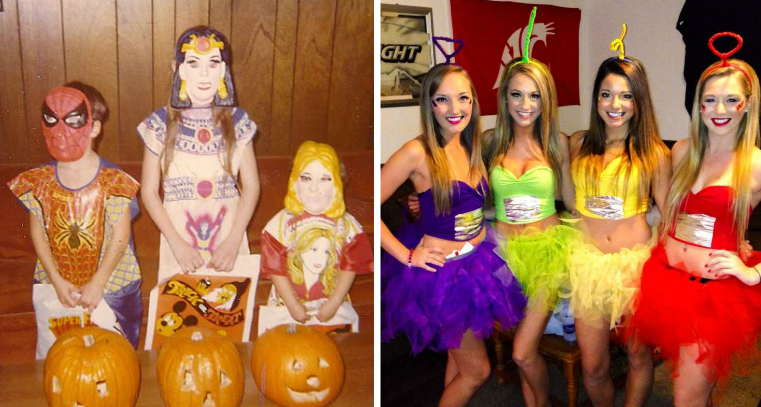 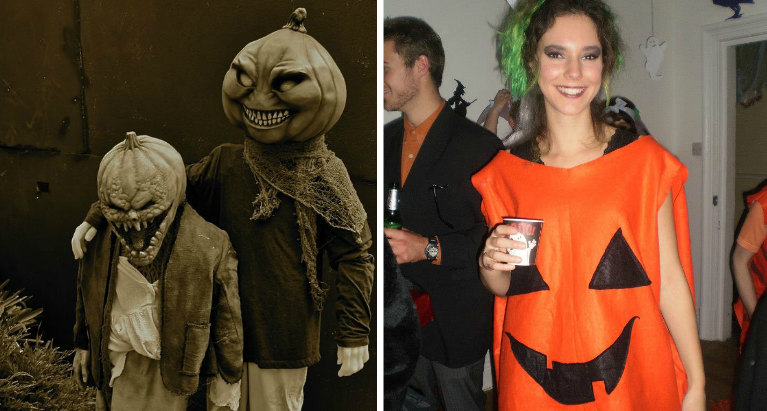 When you talk about a pumpkin costume would you rather go as pumpkins dressed as humans or a human dressed in a pumpkin suit? You pick. 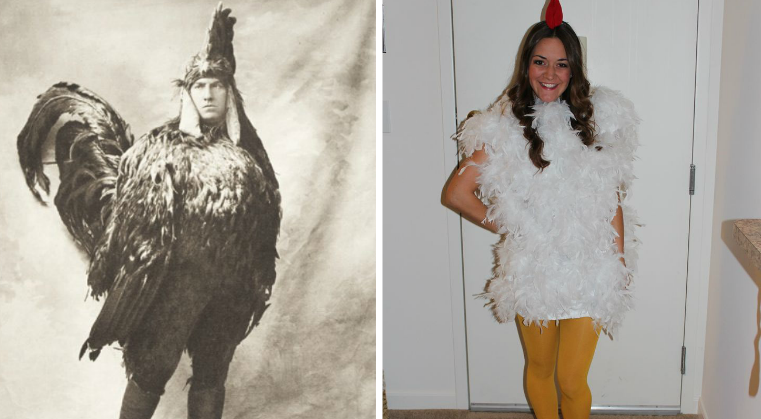 Before, halloween costumes are made with pristine details. Take this chicken costume for example. Today however, as long as it has feathers and a chicken comb, all you just need to do is pair it with yellow stockings and viola! You’re a chicken! Not! 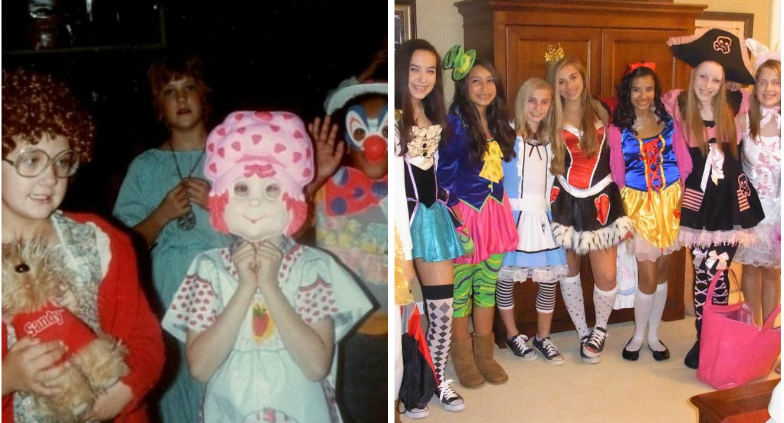 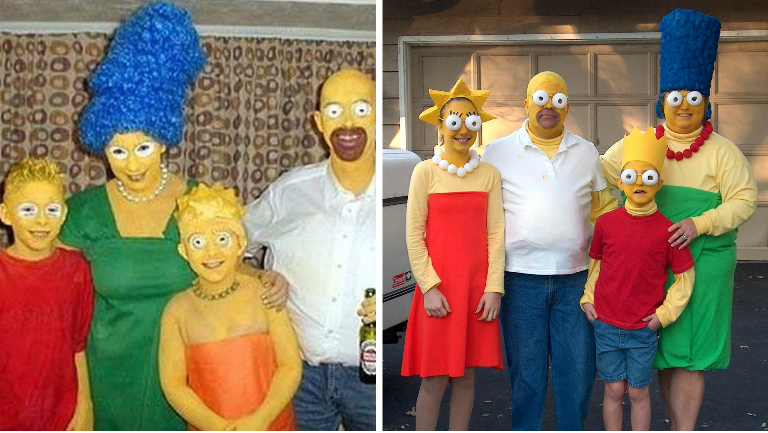 This is one good comparison of a family dressed in the Simpsons Costume. The older picture is definitely a better version as the family took their time to paint not only their faces but their entire body in yellow not to mention including their hair. Where as the other picture only made minimal efforts on looking exactly like the characters. Still, both are a great Halloween costume idea though. 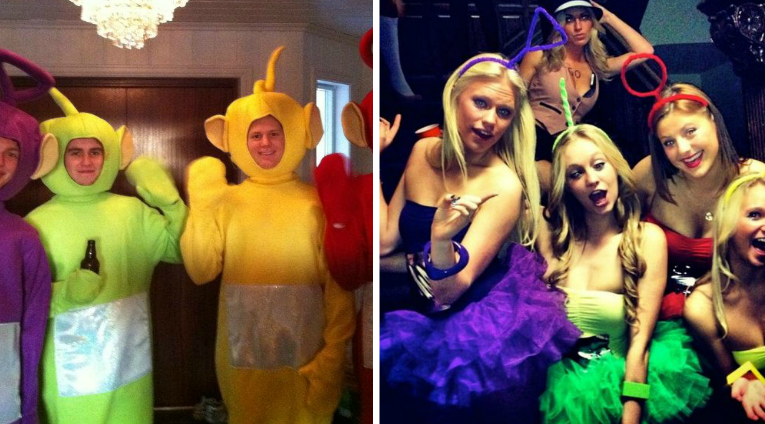 When we watched the TV show Teletubies before, we sure enjoyed the weird round bodied aliens in different colors running around our television screen. But I don’t recall having seen girls with short mini dress costumes and weird head band thingies on that show. 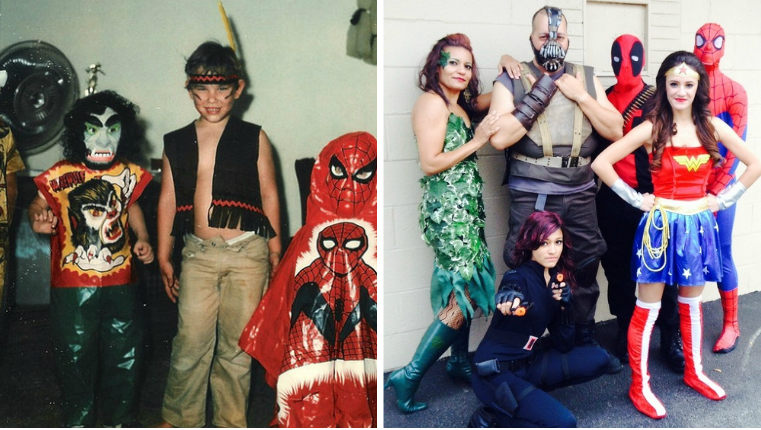 Apparently today, the more details your costume has, the better. Sorry, but a spiderman blanket suit is just no match for a real polyester spiderman costume. 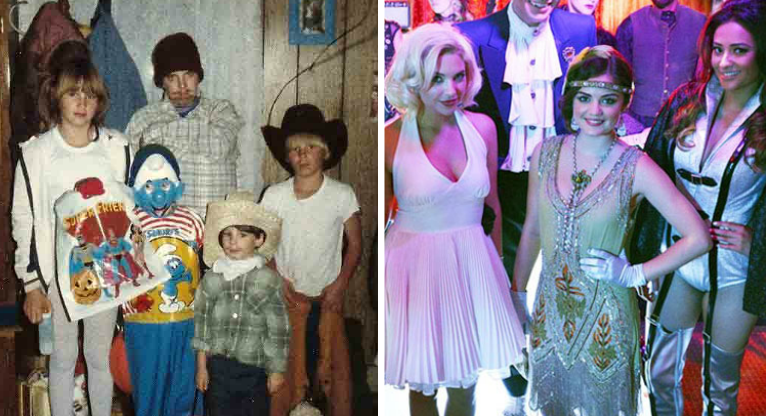 Whatever happened to the silly and funny costumes we had before? Currently being replaced with the sexy, more sassy and glittery costumes today. Nobody cares whether it’s ridiculously funny or not as long as it makes you look good and stand our in a crowd. 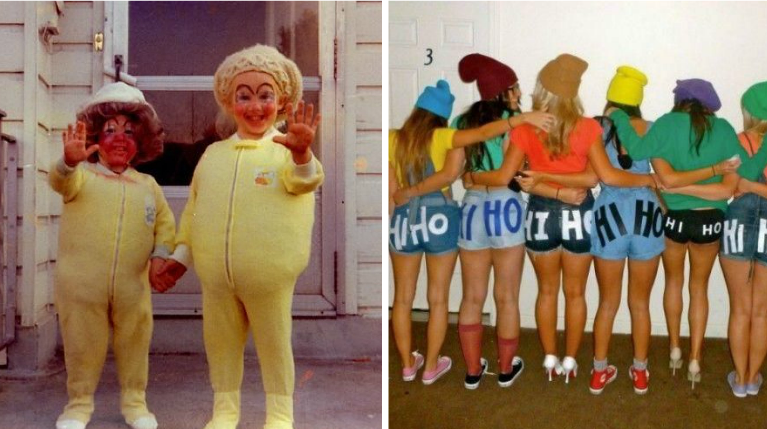 In all honesty? Which dwarf costume do you prefer? A perfectly made silly dwarf  (oompa-loompa) costume with matching hair du, or a bunch of dwarf posing bimbos wearing skimpy short shorts to showcase their asses with the Hi-Ho dwarf song? 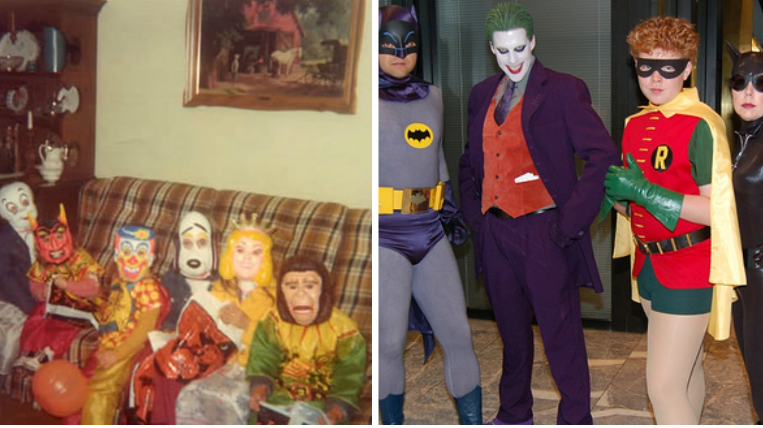 Ahh don’t you just miss the simplicity of just a silly sack costume plus mask we opt to wear back in the days? Today however, costumes in Halloween would have to look more realistic or it’s not acceptable to wear. 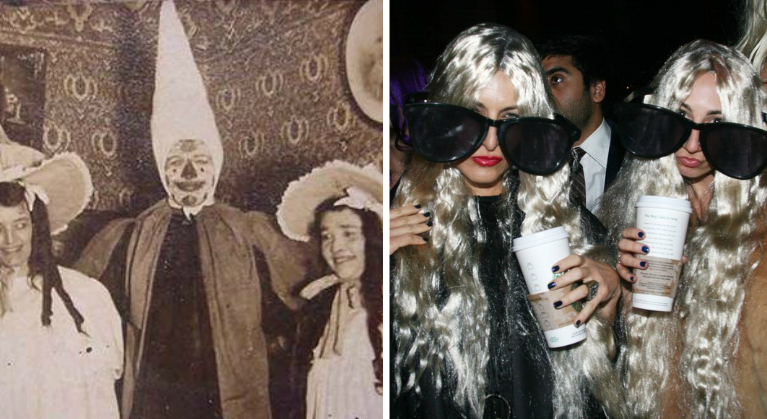 The battle of the twin costumes: The famous aboriginal ghost twins before, with creepy matching dresses and hats vs. a costume of the Olsen Twins with platinum blonde hair plus matching huge sunnies and Starbucks coffees. Word! 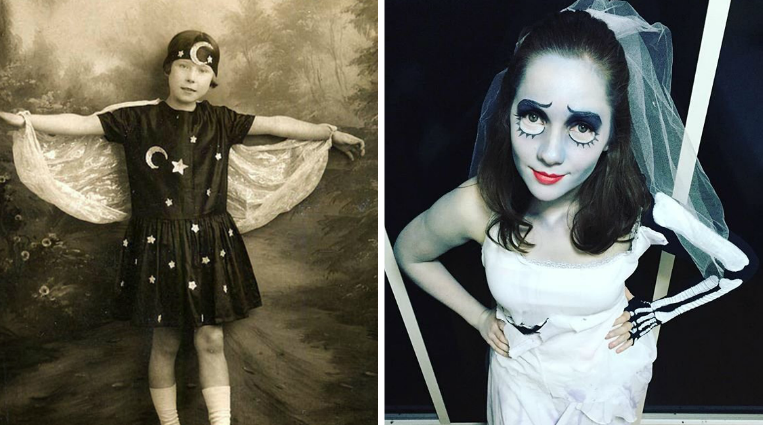 When before a simple shimmering dress and a little laced cape would do fine on a halloween costume standard. Now, it all involves how awesome your make up is, how detailed your face contour is, and how sexy your dress is. Otherwise, it wouldn’t count. 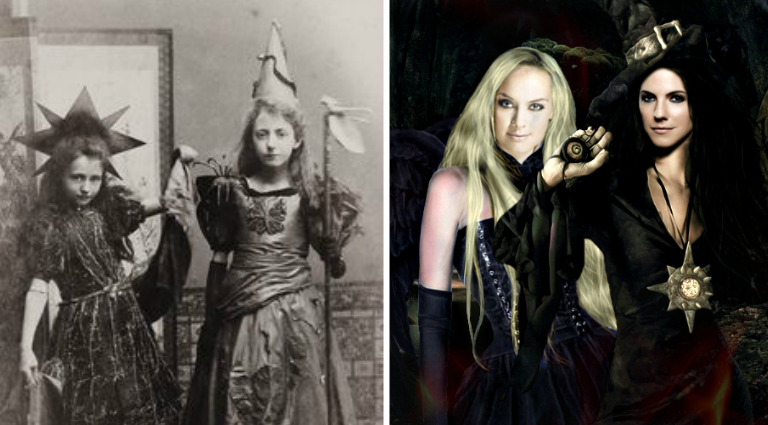 Before it used to be only just dark colored long dresses and pointy hats and well a broomstick of course to qualify yourself as a witch in halloween. Today, it’s all about the corset, the black tight dress, and the gothic make up. 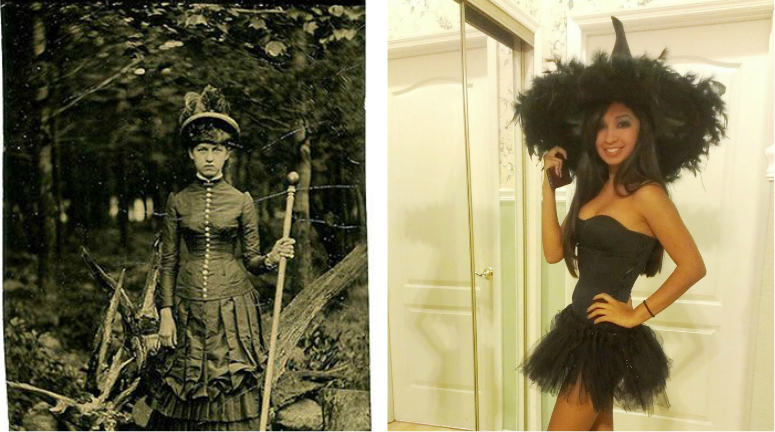