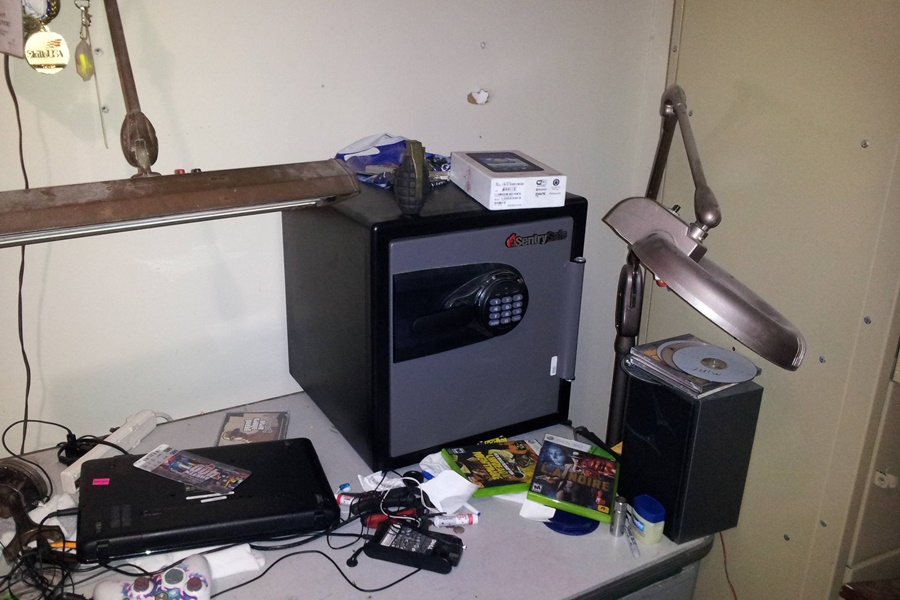 A reformed thief from Texas makes a living by using his skills to help people open their safes in case they forget the combinations or come up against lock malfunctions. What he found in this safe bought off of Craigslist is not only disturbing, but downright terrifying and life-threatening.

He found the safe listed on Craigslist – where you can buy just about anything as long as it’s not connected with an illegal activity. But more often than not, even with all the rules and regulations in place, things have their own way of slipping through the cracks.

“I am a reformed thief, and one of the ways I supplement my income is by using my old skills to help people,” the man said.

Lost or forgotten combinations are not the only reason that safes might need to be cracked. Many times, people turn to a locksmith due to a lock malfunction or a failed burglar attack.

According to the buyer’s testimonial, the safe was left in a house where the tenant had been hauled off to prison.

The landlord wanted to get rid of the tenant’s belongings and listed it on Craigslist for $100, but was willing to give it away free of charge and split the profits with the person able to crack it open.

The reformed thief wanted to try his luck at cracking the safe open, so he paid the full $100 price for it, hoping to find more money inside.

“I was feeling lucky, so I gave him $100 for it, hoping there was more money inside of it,” he said.

When he picked up the safe, it looked like it was in pretty good condition. He drove it back to his garage and started to consider different ways of busting it open.

At first, he was thinking of using an acetylene torch.

He changed his mind at the last minute and decided to go with a different technique.

He turned the keypad and it came right out. Underneath it, he found a 6V power source and a hole leading inside the safe.

He decided to go for a technique similar to hot-wiring a car.

According to the buyer, the black and red wires that were connected to the locking mechanism were switched through the keypad. The first thing he needed to do was to send 6 volts through those wires.

The yellow wire was connected to the current-carrying coil for the lock-out mechanism, which keeps the safe from locking while it’s still open.

The green wire unlocked the safe.

The man didn’t want to take any unnecessary risks, so he used a Digital multimeter to double check the voltages and make sure the wires did precisely what he assumed they did.

“Unfortunately, I was working alone and could not take pictures of my hot-wired design, as I had to hold everything close to the safe,” the man said.

According to the self-admitted former thief, the solenoid for the safe’s lock was wired in a similar way with the starter solenoid in a car.

The only exception was that all three wires were switched, not just the starter wire. The man described breaking into the safe as “hot-wiring a car with a three-wire ignition system”.

Although it may seem like a very complex and time-consuming technique, it only took the reformed thief 15 minutes to get into the safe.

What he found inside is stomach-turning, to say the least.

He was shocked to find a live hand grenade inside, dangling from the safe’s door.

“I’m glad I didn’t just hit the safe with an acetylene torch. That grenade would have killed me,” the buyer said.

As it turns out, the highly unstable grenade was not by any means the most disturbing thing stored in the safe by the previous owner.

Along with the grenade, the buyer also found a magazine of .40 hollow point pistol rounds with a couple of loose shots, a necklace and bracelet, a journal, a hard drive, a gift card, a notebook filled with addresses and phone numbers, a few bank receipts, and several SD cards.

When he checked the SD cards and the journal, the buyer was so startled that he almost passed out.

The safe’s owner – who was now imprisoned – had most likely hung the grenade on purpose, so that it would have destroyed the SD cards and the journal stored in the safe, in case he was ever raided.

The SD cards contained child pornography, while the journal was full of sickening rape fantasies. The previous owner wrote about how he would kidnap and abuse children in excruciating detail.

“Unfortunately, there are some very twisted people in this world. I contacted authorities after checking the cards,” the buyer said.

The police confiscated the SD cards, the journal and the grenade, and the reformed thief was awarded $100 for turning in the evidence.