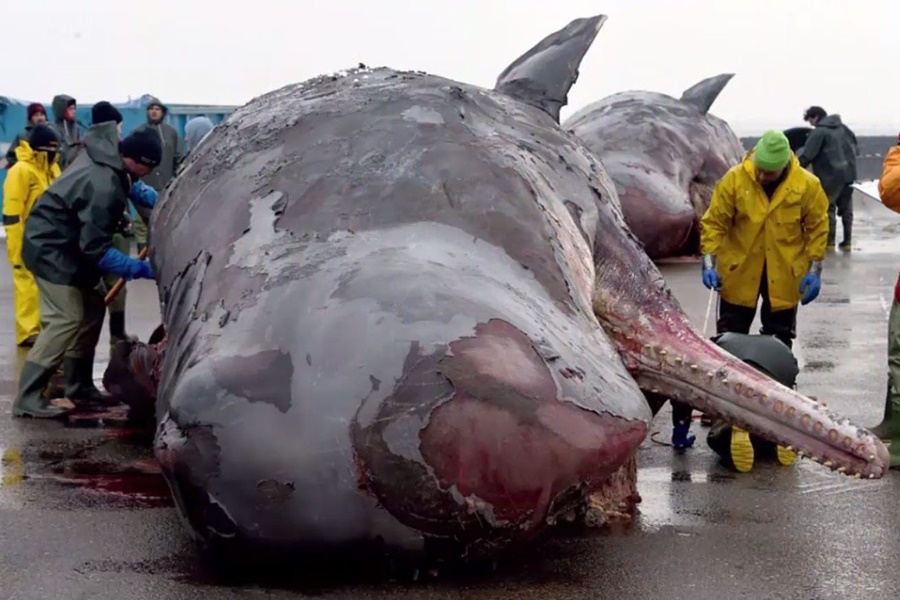 Marine biologists were brought to tears upon discovering thirteen dead sperm whales washed up on the North Sea Island shore in Germany. What they found in the animals’ stomachs is deeply disturbing.

The shocking discovery left scientists in a cold sweat, adding to a puzzling series of sperm whale strandings across the North Sea shores since the beginning of the year.

Commonly referred to as “cachalot”, the sperm whale is the largest toothed whale and toothed predator. It has the biggest brain of any creature on Earth and it is believed to be one of the deepest diving animals, plunging as far as 3,280 feet (1,000 meters).

For three centuries, sperm whales were viciously hunted for a liquid wax called spermaceti that can be found in their heads. The wax was used to produce various lubricants and candles.

The end of commercial whaling helped the sperm whale population increase into the hundreds of thousands.

However, a substance found in the whales’ digestive system is still used in perfumes, and the species is considered vulnerable by the International Union for the Conservation of Nature and Natural Resources (IUCN).

Sperm whales usually migrate from their tropical or subtropical habitats after the mating season. They travel to colder waters, found at higher latitudes.

Nutrients from sperm whale waste help generate the growth of phytoplankton – microscopic organisms that live near the water’s surface in almost all oceans and fresh waters on Earth.

Phytoplankton is crucial for the oceans’ food chain and contributes between 50 to 85 percent of the oxygen in Earth’s atmosphere.

The 13 dead animals beached on the North Sea shore were all young males between the ages of 10 and 15.

At first glance, the marine biologists investigating the whales’ unfortunate deaths couldn’t find anything wrong with them, so they ordered a necropsy. The findings made their flesh creep.

Before the necropsy was performed, Professor Ursula Siebert, director of the Institute for Terrestrial and Aquatic Wildlife Research at the Tierärztliche Hochschule Hannover, examined the sperm whales with her team.

All animals were young – 10 to 15 years old, weighed 12 to 18 tons, and appeared to be in good health. The whales’ hearing – which is very important for their orientation – showed no signs of a severe acoustic trauma and the parasites infestation in their internal organs was normal.

The team of experts concluded that the beached whales had mistakenly headed into a shallower area of the North Sea, in between the U.K. and Norway. But was that really what led them to their grim fate?

The causes of their disorientation are unknown, according to scientists.

Unusually high temperatures and particularly strong storms generated by the heat waves registered in the North-East Atlantic could have pushed water masses from the Norwegian Sea southwards into the North Sea.

Scientists believe that the sperm whales followed their main food and entered the North Sea by mistake.

However, scientists made it clear that the occurrence of sperm whales in the North Sea does not require any extraordinary explanations.

All migratory species occasionally appear outside their distribution area. Sometimes, they are able to find new habitats and adapt to new living conditions.

Since the 16th century, more than 200 sperm whales were found dead on the North Sea coast.

However, never have the post-mortem investigations revealed such gruesome results.

“It is thought that the thirteen sperm whales may have got lost and entered the North Sea (possibly chasing squid), where the sea floor is not deep enough, causing the whales to become disorientated and die,” said Danny Groves, a spokesperson for the nonprofit Whale and Dolphin Conservation (WDC).

According to the WDC, whales and dolphins may stray from their course and get lost due to noise pollution from ships and drilling expeditions or even small fluctuations in the magnetic field.

Moreover, high levels of toxins from ocean pollution are believed to affect the animals’ brains and cause disorientation.

So far this year, over 30 sperm whales have been found dead along the shores in the U.K., the Netherlands, France, Denmark, and Germany.

The necropsy would show that the 13 animals found in Germany had by far the most sickening and terrifying deaths of all.

Full necropsies were performed on all the dead animals. When the whales were opened up, the experts in charge of the investigation were shocked to find their stomachs and intestines full of plastic waste.

According to a press release from Wadden Sea National Park in Schleswig-Holstein, the startling contents included a 43-foot-long (13-meter-long) fishing net, plastic buckets and, shockingly, an entire car engine and other car parts.

“These findings show us the results of our plastic-oriented society. Animals inadvertently consume plastic and plastic waste, which causes them to suffer, and at worst, causes them to starve with full stomachs,” said Robert Habeck, Environment Minister for the state of Schleswig-Holstein.

Whales and dolphins can swallow garbage simply by accident or because they mistake it for their prey.

According to marine biologists, the waste can cause extensive damage to the animals’ digestive systems and it may even reduce their feeding instincts, leading to malnutrition.

“The plastic debris in their stomachs is a horrible indictment of humans,” said Hal Whitehead, a whale researcher at Dalhousie University in Nova Scotia, Canada.

In this particular case, the 13 sperm whales were apparently starving right before they washed ashore.

The animals would have needed at least 900 lbs (400 kg) of food each, in order to sustain themselves.

However, scientists were unable to find any evidence that the stranded whales had eaten anything other than plastic debris in the days leading up to their deaths.

“Although the large pieces will cause obvious problems and block the gut, we shouldn’t dismiss the smaller bits that could cause a more chronic problem for all species of cetacean – not just those who suction feed,” added Nicola Hodgkins of Whale and Dolphin Conservation.

According to the United Nations, humankind produces over 220 million tons of plastic every year. It is estimated that every square mile of ocean contains 46,000 bits of plastic floating around. Hundreds of thousands of animals end up eating those pieces of plastic. More than 100,000 die every year.

Sea birds are also affected. A study published in the “Proceedings of the National Academy of Sciences of the United States of America” shows that 90 percent of sea birds swallow plastic waste. The same study estimates that all sea birds will be eating plastic by 2050.