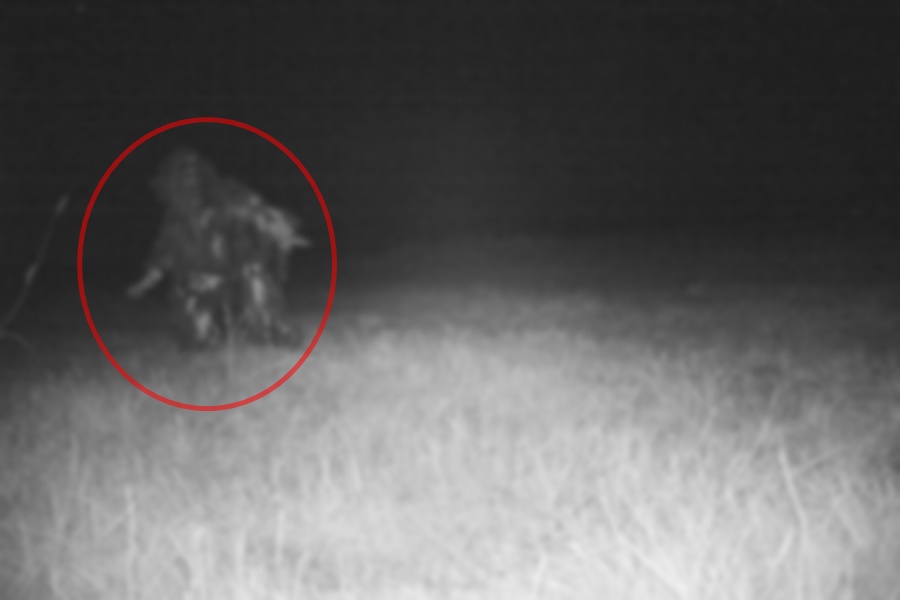 After people in Gardner, Kansas, reported seeing a mountain lion in a national park, the local police decided to set up a couple of trail cameras in hopes of finding the wild creature.

When they reviewed the footage after three days, they weren’t prepared for what they found.

The Gardner Police Department in Kansas took the sightings and reports of mountain lions in the Celebration Park area extremely seriously and decided to step in immediately.

“It’s not impossible for there to be mountain lions in this area, because there have been several reports in the past,” said Lieutenant Lee Krout, of the Gardner Police Department.

The mountain lion – also known as a cougar, puma, or panther – is believed to have disappeared from Kansas and other prairie states in the early 1900s, due to unregulated hunting.

However, the Kansas Department of Wildlife, Parks and Tourism receives thousands of reported sightings on a regular basis.

“Most of the comments are from people claiming they have seen mountain lions in Kansas,” said Mike Miller, Wildlife and Parks information chief.

The first documented mountain lion in current times was shot by a landowner, in 2007. Fifteen more have been documented in Kansas since.

Last month, a man from Rawlins County, in northwest Kansas, found images of a mountain lion on his motion-activated trail camera.

Biologists believe that the big cats returned to their original habitat in the 1950s.

Despite sightings becoming more and more frequent, the Kansas Department of Wildlife, Parks and Tourism reassures people that the situation is under control.

Understandably, the Gardner Police Department took people’s concerns seriously and started to look for the loose animal reportedly spotted in the national park.

They were completely unprepared for what they found instead.

They set up several motion-activated trail cameras on the Celebration Park’s premises and kept the area under constant surveillance for three days.

When they reviewed the footage, there was no sign of a mountain lion. However, they did find some other wild life – such as a skunk, a raccoon, and a coyote – and something a lot scarier than that.

“We definitely got some wild life,” Lt. Lee Krout said.

But there was more. The trail cameras caught sight of a number of unidentified creatures and unusual activities that left police officers at a loss for words.

“We did not see a mountain lion,” Gardner PD representatives said.

“We were however surprised by some of the images that the cameras did take. We have included a few of these images for your review. We are attempting to identify some of the wild life and activity in these images.”

While looking through the footage, the police officers at Gardner PD soon realized that the images were definitely peculiar and confusing, to say the least.

Some of them were downright spine-chilling.

When he saw what looked like a nightmarish swamp creature on the footage, Lieutenant Lee Krout’s blood ran cold.

“I called a couple of other people in the room and said: ‘Hey you gotta see this'”.

Apart from the somewhat blurry swamp beast, the cameras captured something that looked like a female werewolf wearing high heels, a man with a strange mask, an old lady with a walker carrying a bow and arrow, a couple of men wearing gorilla suits having odd interactions, and some other creatures yet to be clearly identified.

That’s when police officers realized they had fallen victim to an elaborate prank and thanked the masterminds behind it for the scare and for their “sense of humor”.

“We would like to sincerely thank the persons responsible as it made our day when we pulled up what we expected to be hundreds of pictures of coyotes, foxes and raccoons. Thank you to the citizens who noticed the cameras. Your effort and sense of humor are greatly appreciated,” Gardner PD representatives said.

“It was actually very humorous,” Lieutenant Krout of the Gardner Police said.

“I mean, at some point, it became quite obvious that it was people playing a joke or just having fun. Even if they weren’t looking to make us laugh, they were looking to make somebody laugh and that’s why we wanted to make the pictures public and I think we succeeded.”

“We don’t always get fun things like that to look at and people aren’t always as respectful as they were. I guess I would just like to say thank you. We get your humor and we appreciated it,” Krout said.

The concerns of mountain lions running loose in Kansas have not been put to rest yet, so the Gardner Police Department will continue monitoring wild life in the area.