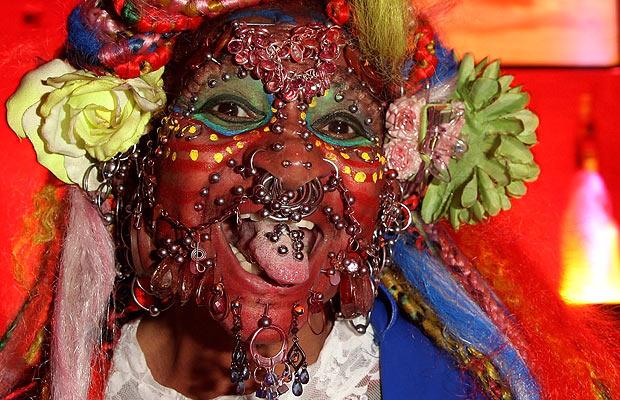 When one’s not satisfied with his body, he does certain modifications to improve it and make it look as how he wanted it. Most wish to be more beautiful and handsome while there are some who wishes to be oddlydifferent.

In today’s modern culture, society has developed to be more open tobizarre and way out of the usual changes rather than blending in as ordinary. Body modifications and physical alterations seems to be taking the world massively by far as a lot of people change their physical appearances to the extreme, and by extreme we mean inhuman. Whether it’s a cultural tradition, a passion, or just an excuseto get world attention, some individuals push it to the limit from the typical weird to ridiculously freaky.

Below is a list of 15 People with the Most Disturbing Body Alterations. 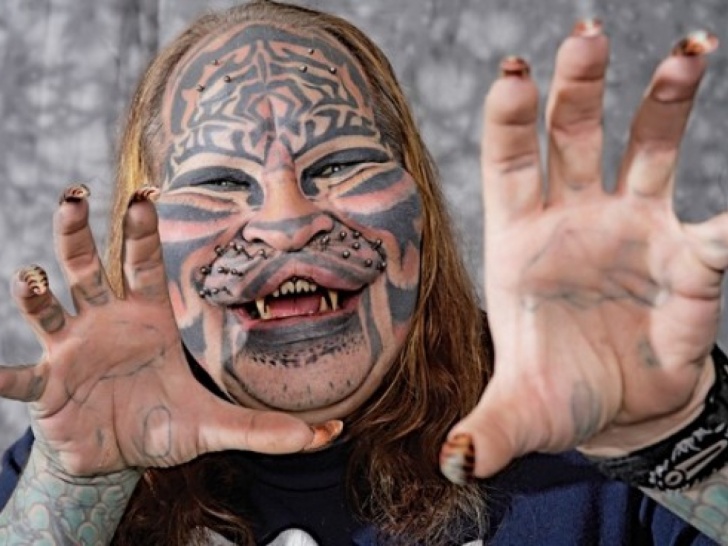 Also known as the “Stalking Cat”held a world record for “most permanent transformations to look like an animal” in 2009. He not only had extensive body tattoos and peircings just to look like a cat, he also had subdermalimplants to change the shape of his head, flatten his nose, and split his upper lip to resemble the face of a tigress. He has also engaged in sharpening and capping his teeth to resemble fangs. To add up on Avner’s determination to become the ultimate Catman, he wears a robotic tail.

On Novemeber 5, 2015, Dennis Avner was reported dead at his own house. Reports had it, that the possible death cause of the Catman was suicide. 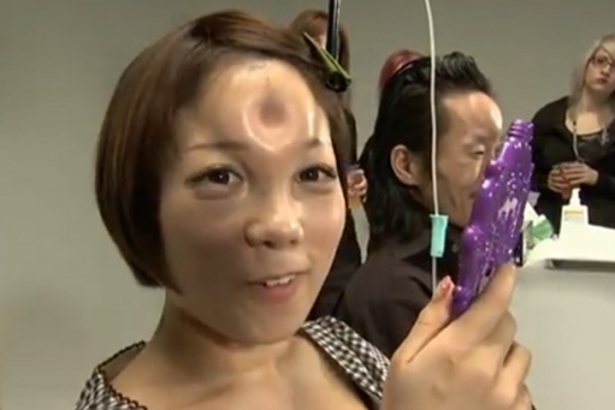 Apparently, Bagel Heads are the newest trend in Japan and a lot of people are getting Saline Injections in their head to shape their forehead like a bagel. The total transformation will only last about 24 hours as the body would eventually absorb the saline and your head goes back to its normal size. The japs surely stepped up their game on this one! 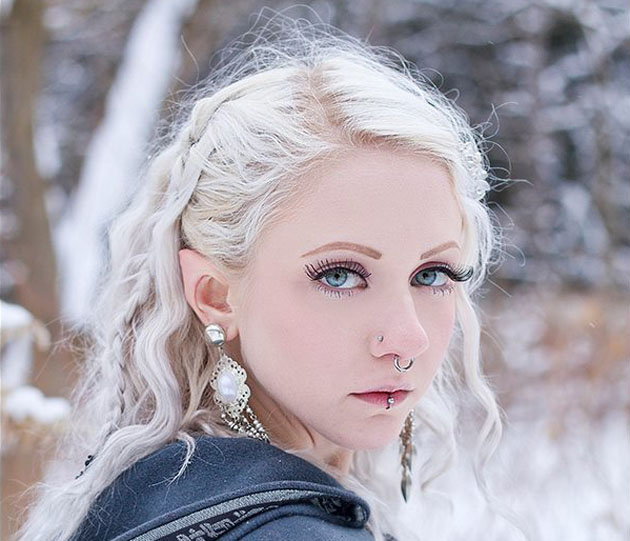 This is a woman, who believesshe’s froma different realm. Melynda, age 26 thinks she was an elf on her past life and wishes to be one in herpresent. So she did! She has her ears operated to have triangular tips shaped like the ones of the elves to bring out the mythical side of her. On an interview she has mentioned that her biggest inspiration is the book and movie “Lord of the Rings” and how this started her obsession for all things ‘mythical’.

Right now, she does role playing at her friend’s house every Christmas to make their children believe that she’s one of Santa’s elves and that she’s going to tell Santa Clause if the kids are being badthe whole year. When kids take one glimpse of her ears they would pretty much realize that their parent’s aren’t joking. 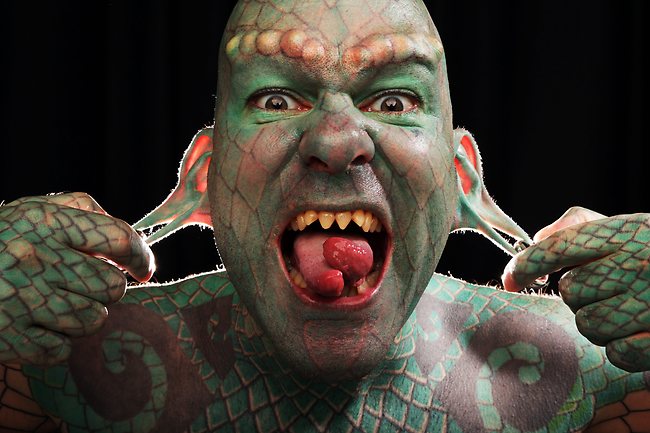 Erik is a freak show performer known as the Lizardman. He is widely known for his over all body modification of green scale full body tattoo, teeth sharpening, tongue splitting, and subdermal implants on his lower forehead. He also has a rock bandn called LIZARD SKYNYRD and they have been touring around the world as they released an album in 2010.Erik alsogained the official Guinness World Record for ‘Most weight lifted and swung from the ear lobes’. Now that’s talent! 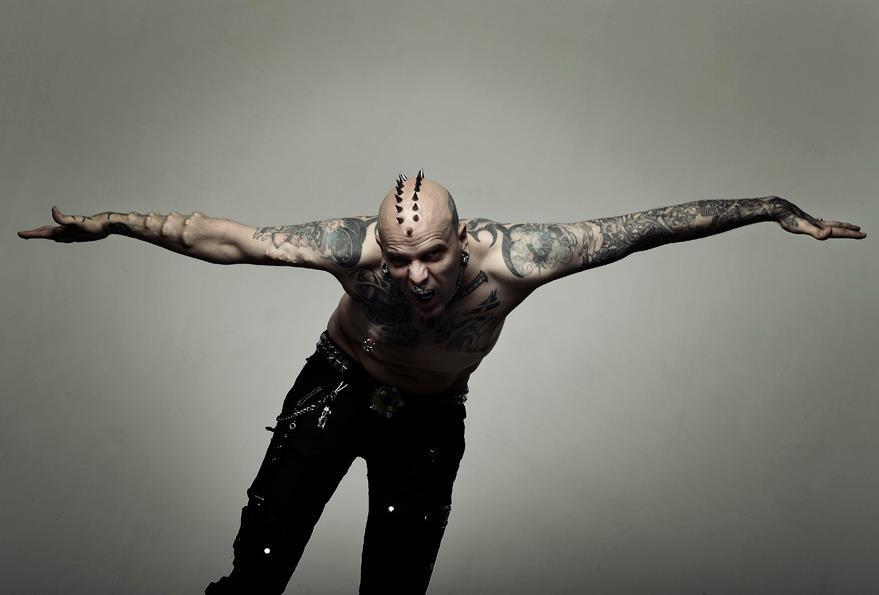 Sampa Von Cyborg is a finish body modification artist and the owner of Mad Max Tattoo and Piercing Studio. No wonder, he looks like a character from Mad Max. Sampa started as a piercing artist in Finland until he discovered the art of body modification. He started to attend professional surgical classes that eventually lead him to a new level of surgical procedure that involves extreme body modification. He is one of the pioneers that created the the spike metal head piercings and subndermal jewelry implants. He also started a group called the Psycho Cyborgs who has been considered today as one of the world’s most hardcore freak show which gained a lot of die hard fans. 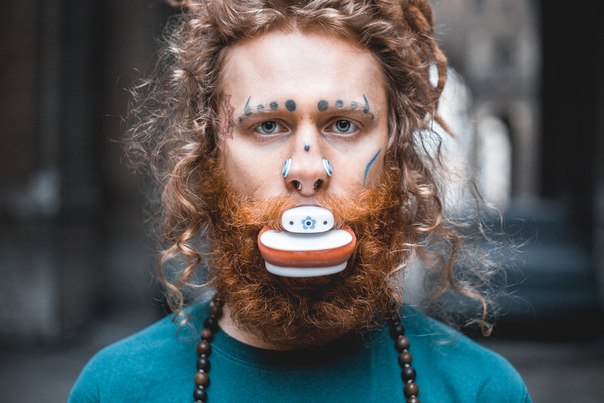 At the age of 19, Jenya has started to stretch his lips to become his spirit animal, the platypus. He has stretched his earlobes, septums, lips and nostrils for seven years to achieve his life long dream. In his childhood, Jenya says he has always been the odd and quiet type, he felt like he does not belong to the norms. So he has dedicated his life to becoming a platypus so he can feelhappy and satisfied. He also said that all the modifications he has done in his body makes him feel as a ‘whole’. 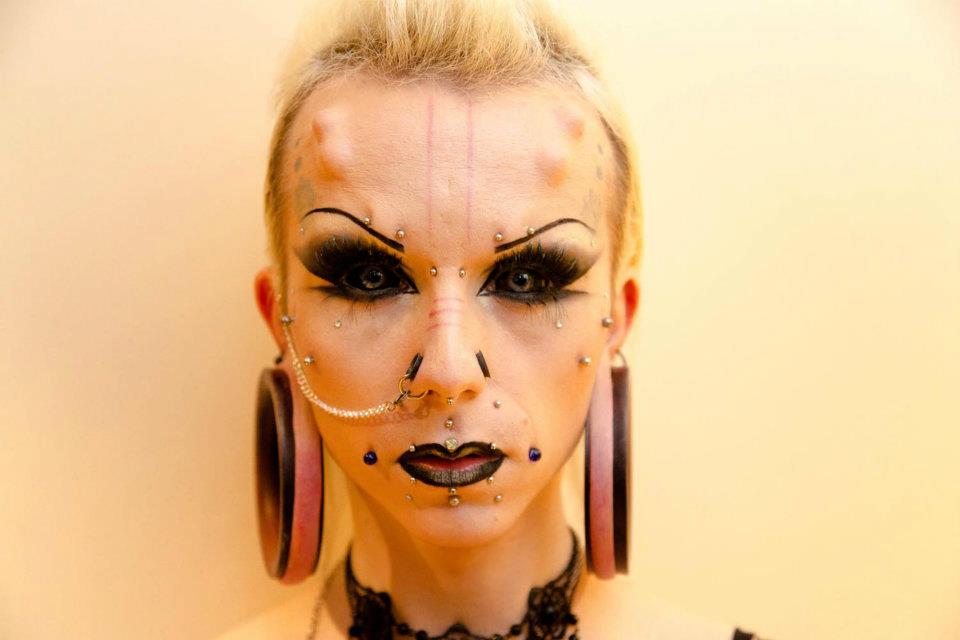 Real name: Veronica,is a polish transgender and a body modification artist based in UK. She hasher eyeballstattooed black, had forehead and arm implants, tongue split and enormous gauges. She owns her own tattoo and piercing studio in London, which also specializes body modifications and scarification. 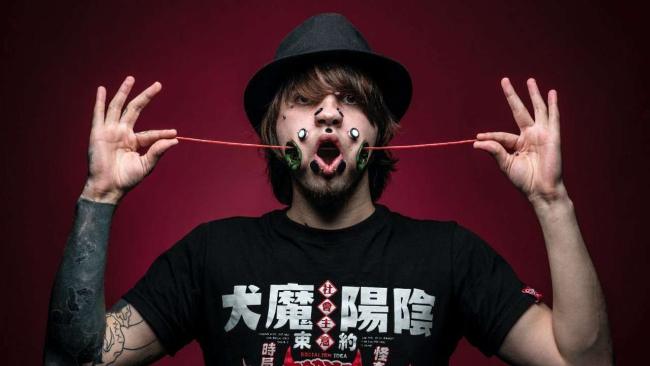 This young lad from Germany, has what you call the largest and freakiest cheek tunnels which is almost 1.5 inches wide. He has started modifying his body at age 13. He also acquired the Guinness Book of Record titlefor the most flesh (face) tunnels in year 2015. Joel has a total of 11 facial tunnels. He says he wants to get an eye ball implant in the future.

Elaine Davidson is the most pierced person in the world. She has over 9,000 piercings in her body. Elaine is a former nurse from Brazil, but now lives in Scotland where shemarried a man who has no piercings in his body in 2011. The next year 2012, the couple divorced.

Elaine has mentioned on an interview that she had the most piercings on her genitalia than any other part of her body, where reports said, she has 500 in all, only in that area. Do you think, thismay have something to do with her divorce? Hmm. 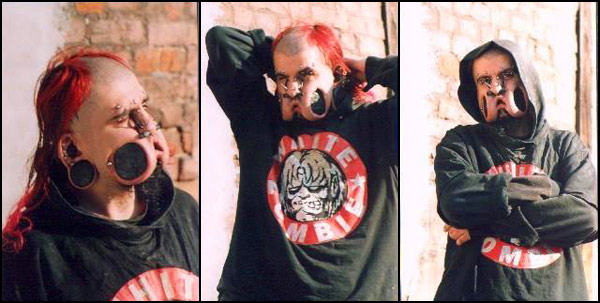 Also know as “fishmouth”, is a rather shy type individual who refused to be interviewed regarding his body modification. He also doesn’t want his picture published in the news, but tough luck for him, the internet has everything. 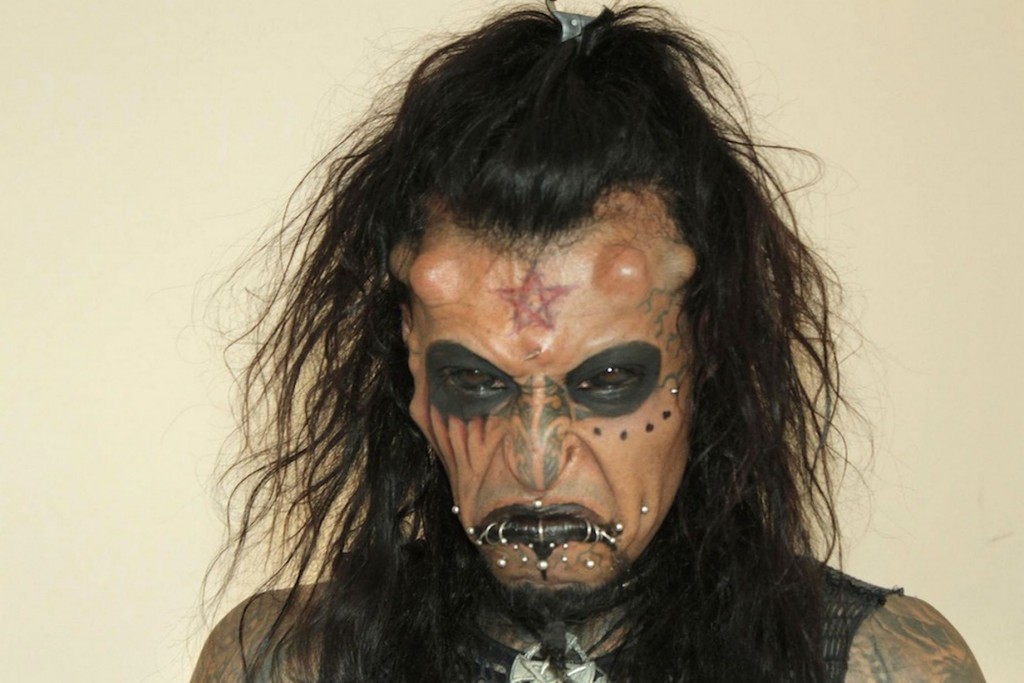 Caim Mortis is a 42 year-old DJ from Columbia who is widely famous as the “Devil Man”. He is very proud with his numerousfacial piercings, black tattooed eyeballs and multiple horn implants. He also has his nose surgically reconstructed to look snake-like. Reports said, that Caim has been modifying his body for 11 years which resulted for his catholic family in Columbia to reject him. Now, Caim lives in Mexico where the environment is more accepting to his unveiling freak of nature. 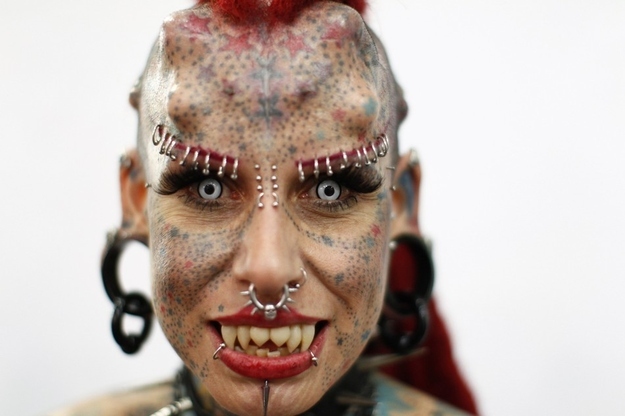 Maria is also known as the Vampire Womanin Mexico. She was a former lawyer who decided to undergo a massive overall transformation. Reports had it, that her decision to extreme body modification is an aftermath of her being a victim of domestic abuse. Her determination of transforming herself to look like one of the characters from 30 Days of Night has landed her to be the first ever vampire ladyin the world. Now, Maria at age 39, owns a tattoo and peircing studio in Mexico and is also part timing as a touring disc jockey. 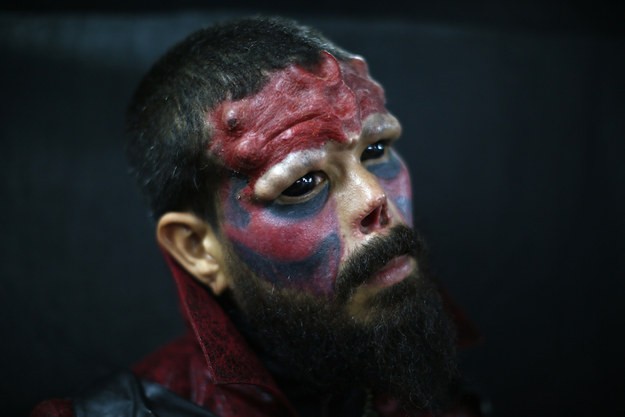 Henry, a comic book fan from Venezuela has devoted his life to look like the Marvel comic book character The Red Skull (from Captain America). Henry has several procedures done to his faceto achieve his goal including chopping off part of his nose and undergo a massive surgical implants in his head.Despite his evillooks, people say that Damon is actually not like his Nazi comic book persona. 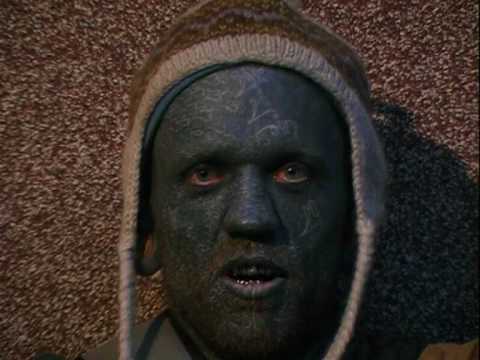 Real Name: Gregory Paul McLaren, a 45 year old man from New Zealand, is now known asthe Most Tattooed Man in the world. Lucky Richhas underwent getting a tattoo in every part of his body including every crevice in his genitalia area. Not only that but he recently has decided to cover all his body with black tattoo all over, covering his former tattoos with it.He has also modified his teeth to become metallic black in color, through dental surgery.In an interview, he reveals that having his whole body tattooed in blacktook about thousands of hours worked by different tattoo artists in the world. He is also a performing street artist during international festivals and events. 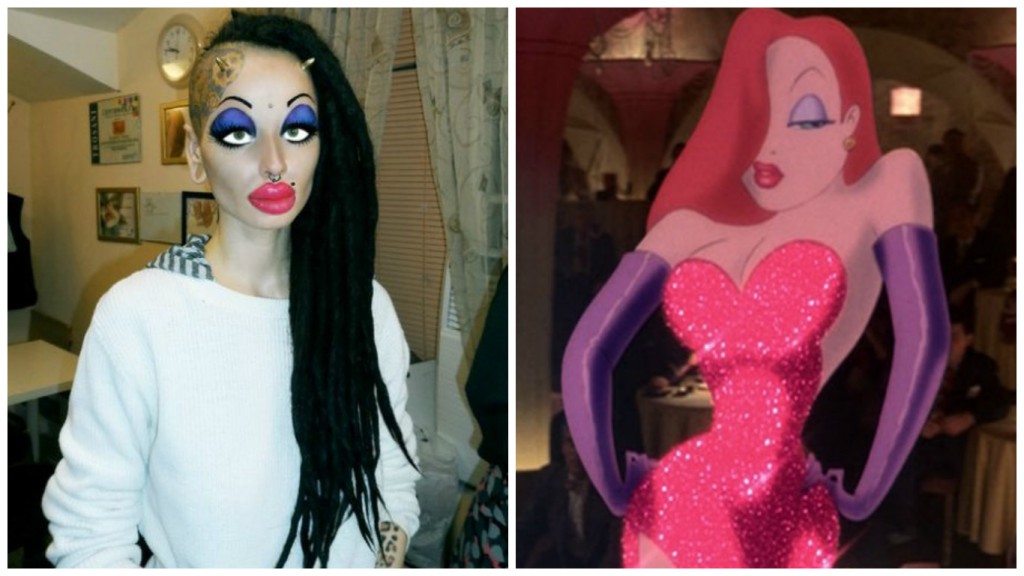 Kristina Rei, 27 years of age is obsessed in becoming a real live version of herfavorite cartoon character, Jessica Rabbit. She also has the title of World’s most largest lipsafter having more than 100 silicone injections on hers. This woman from Russia was fully convinced how ugly her former thin lips were, so she decided to get injections after injections to make it look like the one with Jessica Rabbit, which isher ideaof the ‘perfect woman’. She is quite proud of her looks now and still has plans to enhance it more in the future. Good luck with that Kristina!