Pokemon Go is not only one of the latest craze in today’s modern existent but also a trendsetter that had become remarkably very popular among youngsters and adults alike. It’s ability to get players of different age types and generations to step outside the comfort of their homes and set foot on catching these rare fictional creatures is a definite hype one cannot possibly ignore.

With more than 30 million players across the world, doing their best to be the greatest pokemon master as they travel around hunting down pokemons, it might be a little tough for beginners like you to compete when most especially the only types your side of town has to offer are weedles and ratatas.

However, as the app gains infinite popularity today, so does the rise of these hacking myths and cheats circulating around the internet on how and where to catch these rare and legendary type pokemons.Here, we have put together a list ofdifferent hacks and tricks to help beginners catch different types of rare pokemons. 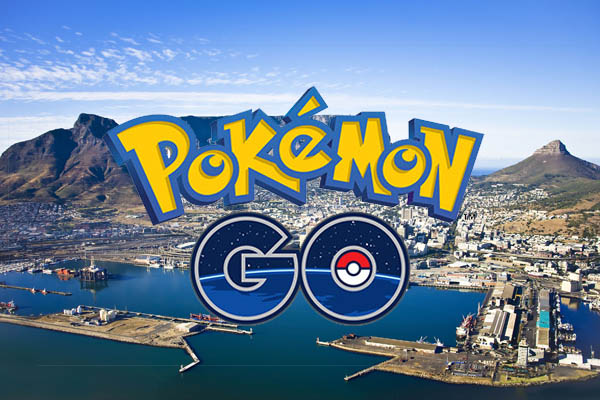 1. How to catch Pikachu. 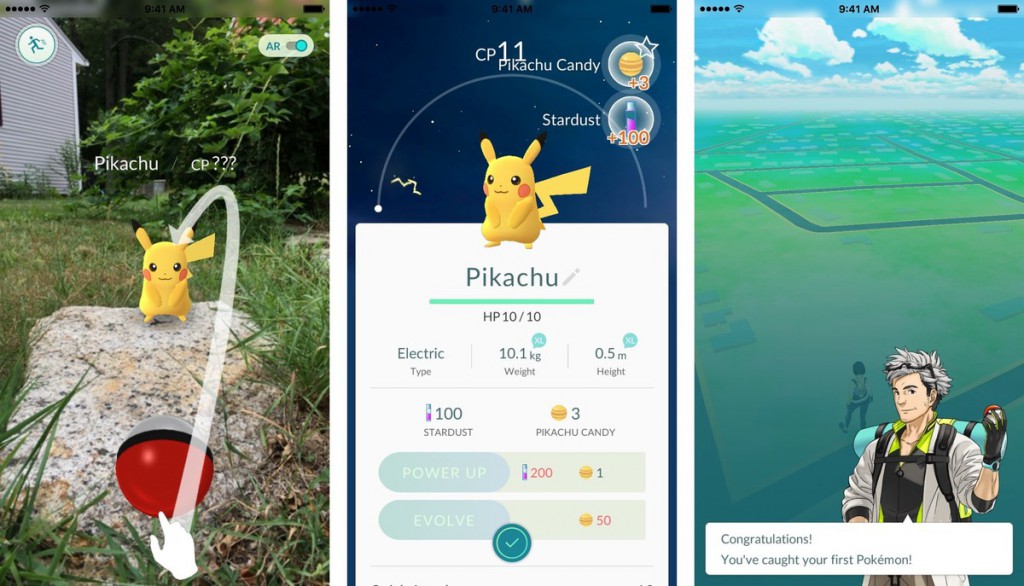 Have you ever felt annoyed on how Pikachu’s silhouette just lurks around your area and no matter how much you try to go around in circles hoping to catch it, it never appears? For some of you who may not have known this simple trick when catching Pikachu, listen up. You can get Pikachu as your starter pokemon.

After customizing how your character looks in the game, you are intended to catch your first starter pokemon where in you’ll have three choices to either pick Bulbasaur, Charmander or Squirtle. All you have to do is walk away to these choices you’ve been offered. Keep walking until you hear a sound where they reappear again. Repeat this for at least six to seven times and Pikachu should pop-up alongside the other starter pokemons.

2. Turn off AR mode to save power and pokeballs. 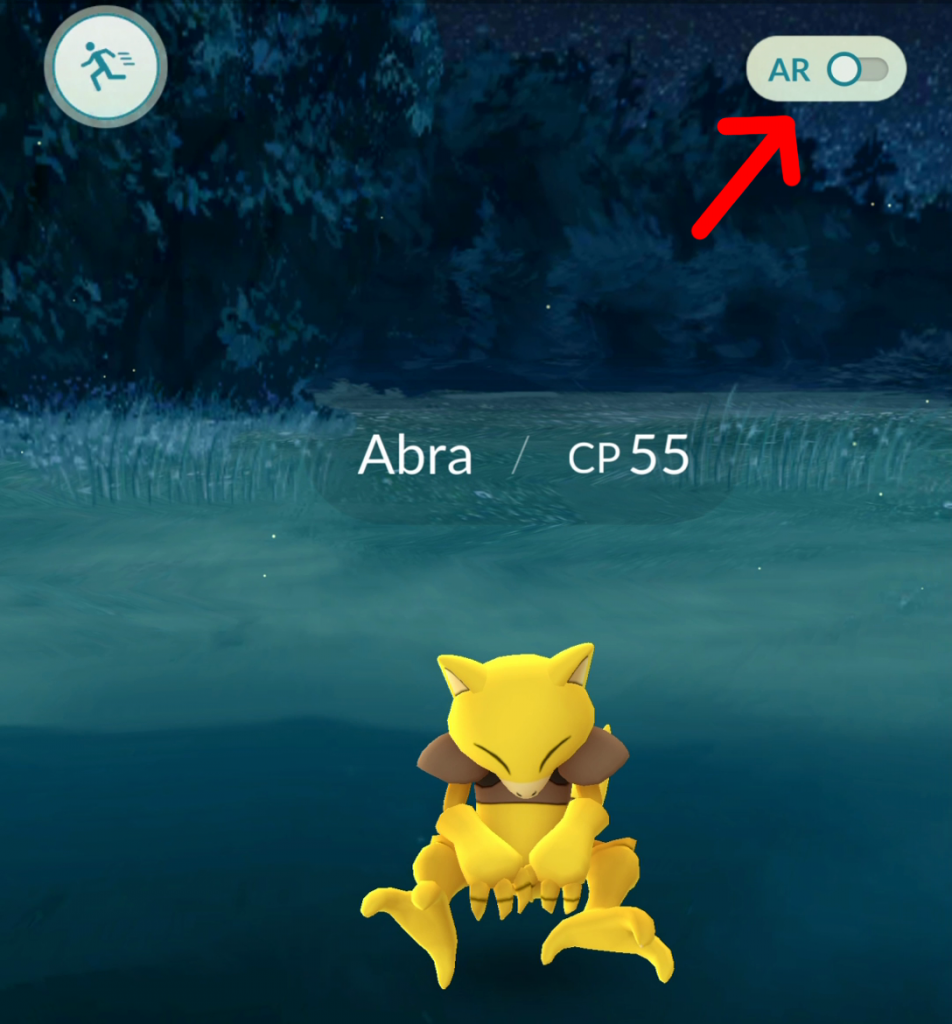 Although, the use of your phone’s camera is one of the most compelling part of the game where players can really feel they’re catching a pokemon in reality, there are certain drawbacks you need to consider in doing so. On the AR mode, the pokemon sometimes appear on inconvenient positions where you have to hold your phone in an awkward angle to catch it, thus sometimes causing you to miss your first, second and third flick of pokeballs. Another flaw in using the AR mode is that it drains your phone’s batteries and processing power as it generates the pokemon to appear on top of your camera’s image. It’s best to turn the AR mode off to make catching pokemons easily done. 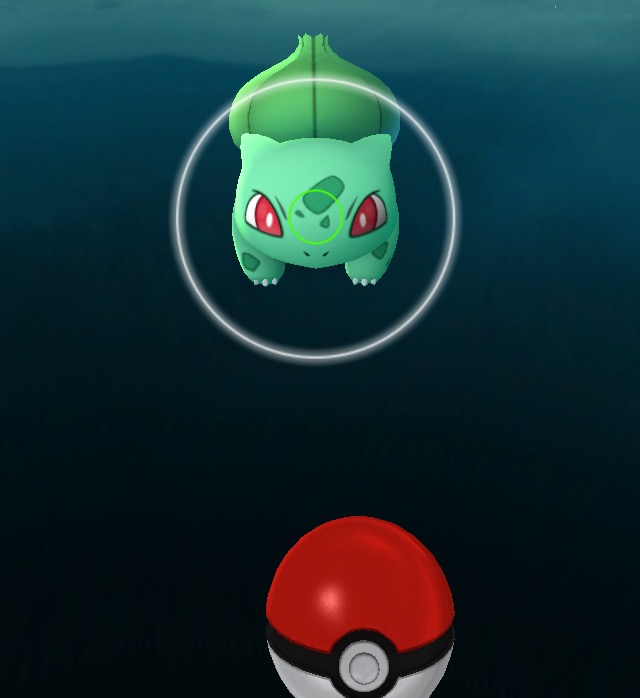 Have you ever noticed how a circle appears (with another circle inside) when you tap and hold a pokeball just before you swipe to throw it? If you ever wondered what these circles are for, they are simply there to guide you of your aim. The coloured circle inside indicates how difficult it is for you to capture the pokemon itself as it turns from green, orange or red. In order to make sure to catch the pokemon on your first throw, wait until the inner circle becomes very small as possible. The smaller the circle is when you throw the ball the more chance for you to perfectly manage the capture successfully. 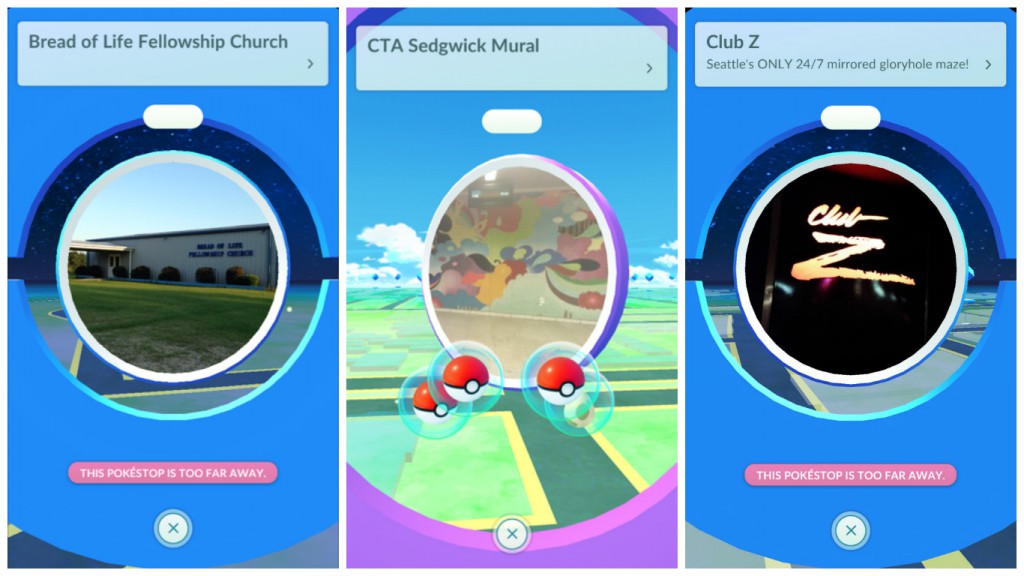 One of the many mistakes of most players is going to pokestops, grab the goodies they can pick up and head off their way. Little did they know that pokestops refresh in five minutes and sometimes even quicker. So hanging around at Pokestops ain’t such a bad idea especially if you can get more free coins and free items that wouldn’t have cost you to max out your credit card for the month. 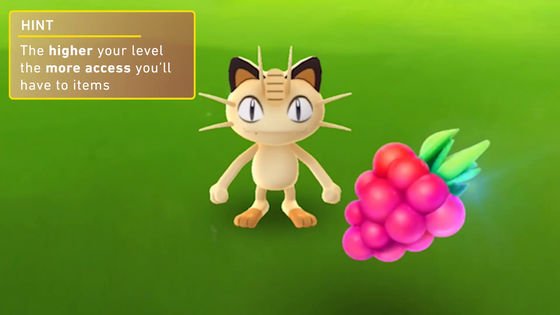 Rare pokemons sometimes appear in a very strange and awful predicaments where you are almost short of pokeballs in your inventory. If you’ve encountered these situations, make use of Razz Beries.

Razz Beries are in the game to help you catch a stubborn pokemon easier. Rare type pokemons with high CP are the ones who strongly dodges your throw and escapes the pokeball after you initially catch them. By using Razz Beries, you are luring the pokemon to eat it thus making it more slower and more easier for you to catch onyour first or second throw.

6. How to get Flareon, Zolteon and Vaporeon. 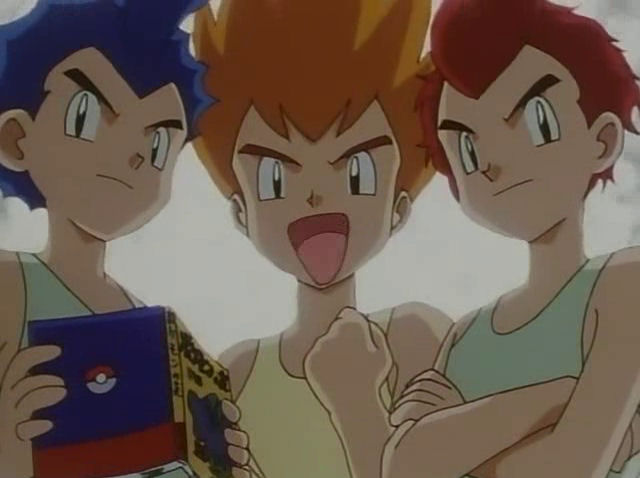 Eevee is one special type pokemon that is very popular not only in the show but also in the game. One reason why everyone is a huge fan of this normal type pokemon is it’s ability to evolve in to eight different rare and poweful variants of itself. In the game however, Eevee can only evolve in to three types randomly after collecting 25 Eevee candies.

Recently, there’s a certain rumor that has been proven true on how to control your Eevee’s evolution. Surprisingly, the game developers, Niantic has managed to insert a part of the story from the original pokemon series to the game itself. In Episode 40 of the original anime, this is the event where Ash and the gang meet with the three Eevee brothers who owned the three evolved Eevee pokemons. Rainer who owns the water type Vapereon, Sparky who owns the lightning type Jolteon and Pyro who owns the fire type Flareon.

To control which type your eevee evolves into, simply rename your eevee in to the names of their trainers. Rainer for Vaporeon, Sparky for Jolteon and Pyro if you want your eevee to evolve into Flareon. After doing so, quit and reload the app or restart your phone and double check if the name change has successfully taken place. By Restarting the app, it manages the servers to save the data before you start evolving your pokemons in succession. 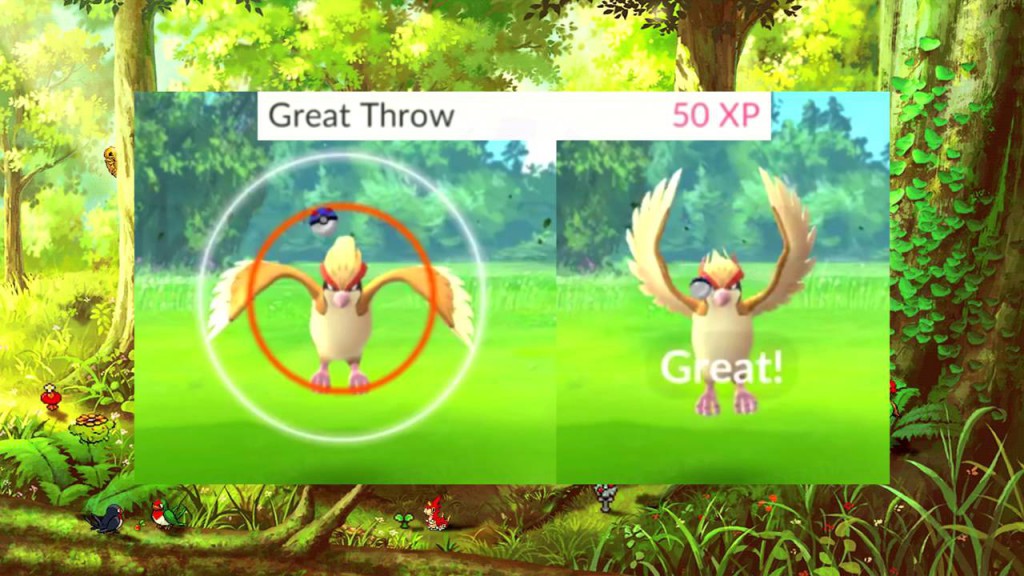 This is another helpful trick in to catching rare type pokemons quickly and easily. To throw a curveball
all you need to do is hold your finger on the pokeball, and start making circular motions on your screen as if spinning it around in moderate clockwise or counter-clockwise direction. Let go of the ball when you feel it’s the right angle to throw it. Not only the curveball trick helps you to catch a rare type like Alakazam that easy, it also gives you an extra 10 XP for pulling it off. 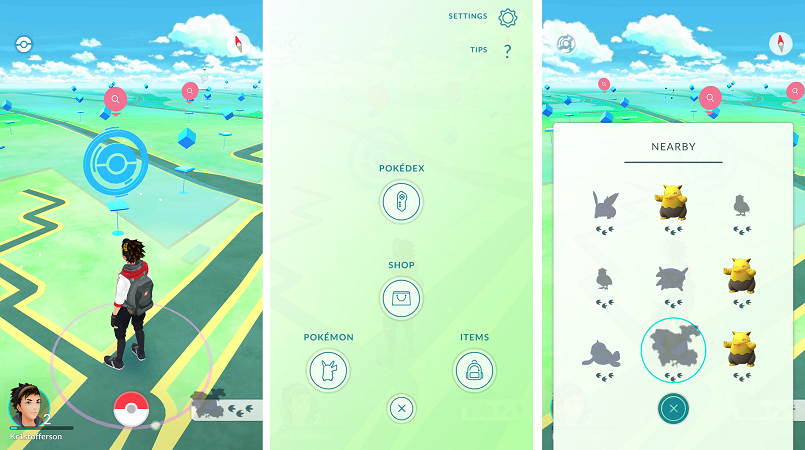 One very easy trick to pull off when trying to catch rare type pokemons spawning your vicinity is just to simply keep the app open. Semi and Ultra rare type pokemons appear randomly in every area, even inside your house (if you’re lucky). If you live in the suburban areas in the US you will surprisingly find a kadabra or a meowth popping out along with your usual garden type variations of pidgeys and weedles. 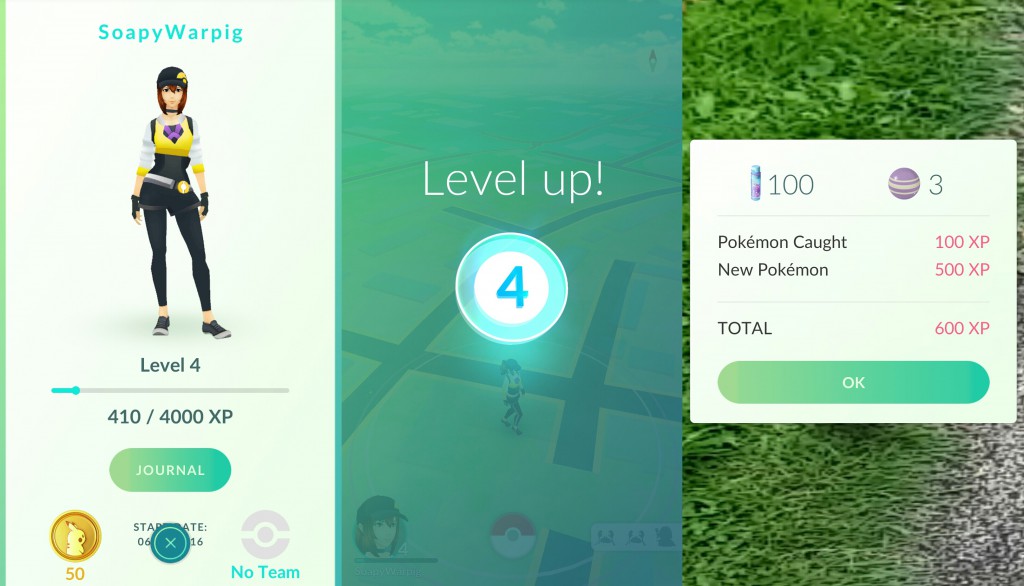 Let’s face it. Chances are very slim for a level 1 trainer to catch a Charizard wandering around your area. Wild pokemon rarity varies depending on your level. When you raise your trainer level by getting more XP so does your chances of getting more rare pokemon visits. Rumor has it that it’s in the 11th level where rare types starts to appear unexpectedly. 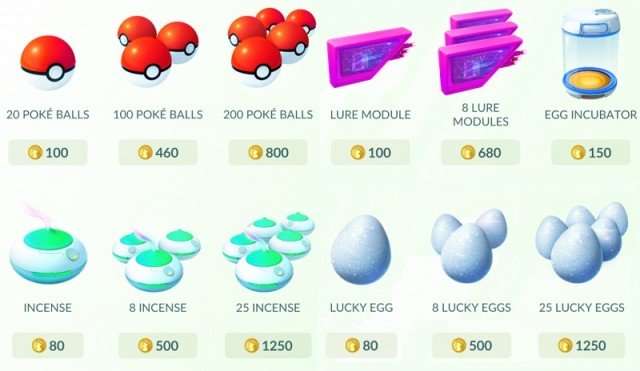 Why not let these pokemons come to you instead of the other way around? There are certain ways you can do to draw pokemons to where you are. Use the insense to attract and lure pokemons in you’re area for 30 minutes. If you’re in possession of a Lure Module item, you can drop it at a Pokestop to bring all the pokemons in your area to that station. A Lure Module also affects other players in the vicinity. Lucky them! 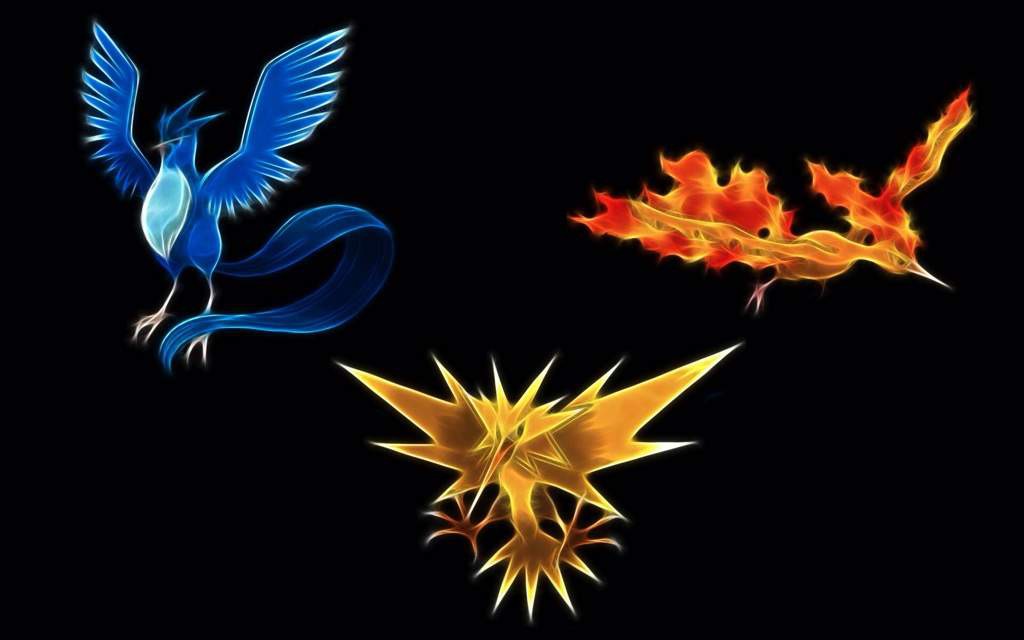 If you are on a hunt for these three legendary pokemons then you’re in for a long and winding road there pal! Obviously, these three legendary beasts are very tricky to find to the point that perhaps, the game developers at Niantic still hasn’t released them at any locations yet. There were also rumors speculating around reddit and gaming websites that you can only catch these three legendary types during exclusive Pokemon Events. Even the top rare ones like Mewtwo nor Mew cannot be easily found at normal locations.

On another perspective, it may seem that rare characters in an area can be quite common in another. So the best advise still for you to be able catch them all is to travel as much as possible. Just always remember to be careful while crossing that street.