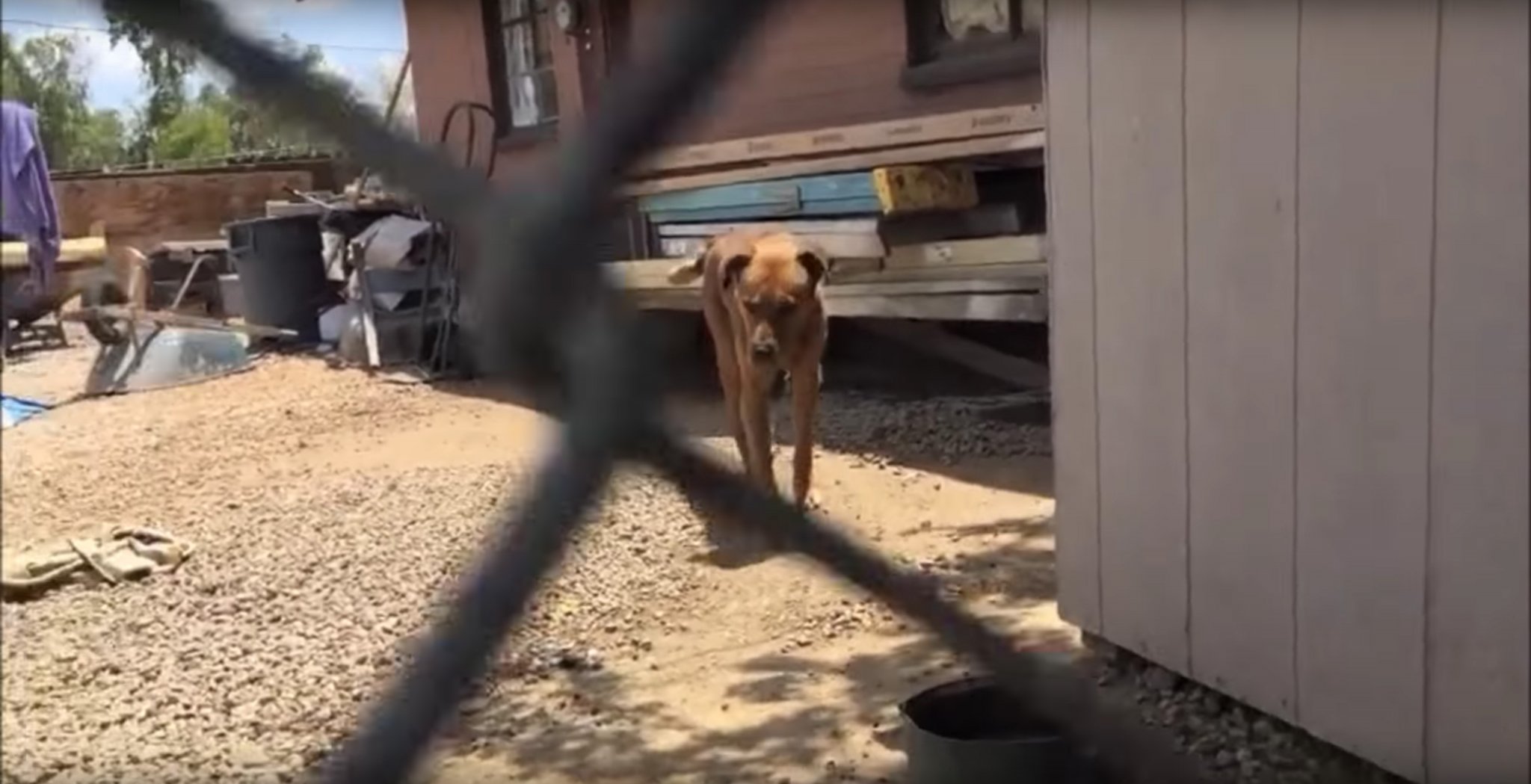 After three years of seeing him hang his head and mill around in the dirt, one man would ultimately become a savior for a little dog in need. Every day, the man would walk to work through 120° heat in Phoenix Arizona, and pass by a shy and fearful dog named Rusty who was fenced in and chained up in someone’s backyard.

As the years wore on, Rusty had become more and more aggressive – snarling and barking at the man as he walked by. His coat was filthy, and he had flies all over him.

One day, the man was out of his house earlier than expected, and had a little extra time. When he walked by Rusty, he barked so ferociously that the man wondered why the neighbors had never complained. He decided to stand nearby and see if anything happened.

After a moment, the man walked up to the fence and tried to get Rusty to stop barking. He spoke in a soft voice, and assured Rusty that everything would be okay.

At first, Rusty was incredibly defensive, but eventually, Rusty’s tender heart came through, and the man won him over. Rusty calmed down in an instant. The man couldn’t believe his eyes. Rusty, who had always been so ferocious, was such a soft, kind, loving soul on the inside. Rusty came over near the fence to make contact.

Going against everything anyone would have told him, the man cautiously stuck his fingers through the fence to pet Rusty.

To his genuine surprise, Rusty took to the affection now that he felt comfortable. The two formed a bond, and it was clear that Rusty was going to need the man to survive. What the man saw next disturbed him.

Due to his timid nature, it was clear that the dog had been chained outside the house, in the scorching heat, for his entire life.

Rusty had spots on his ears exposing flesh, where flies had been eaten them raw. There were dozens of flies that had followed him to the fence – and they were crawling all over his face. Worst of all, Rusty had large tumors protruding out all over his underside. It was obvious that Rusty’s owner didn’t care about him at all, and had never done anything about what could be giving Rusty cancer. Something had to be done, right away. The man couldn’t believe how good of an attitude Rusty had.

The man visited Rusty every single day for several weeks, and the two formed a bond. Rusty’s spirits, while weary, elevated every time the two were in contact. Rusty took to the affection, and the man found himself feeling compelled to rescue Rusty. What happened after that was nothing short of a miracle.

While the man was getting his daily dose of love and care to Rusty, the owner came outside and walked right over to the man. Tactfully, and calmly, the man explained that Rusty desperately needed medical attention for his wounds and the tumors. The owner laughed, and said that Rusty had been chained outside in the heat for almost 15 years. Clearly, the owner didn’t care about animal cruelty laws.

The man got assertive, and said he wasn’t leaving without Rusty. Quickly, the owner got the picture, and went to open the fence. Whether the owner faked it or not, she said she was worried that Rusty was going to bite the man – but that was a risk the man was more than willing to take.

At last, Rusty was finally free.

The man named him, “Rusty Diamond”.

With the ugly, shackling chain in hand, the man walked Rusty away from his prison of a yard, and Rusty came alive. He smelled every smell, sniffed every sniff, and stopped every two feet to inspect every little thing he had probably figured he would never see.

Rusty’s collar was so corroded that the man had to cut it off.

With his chain and collar off for the first time in over 10 years at least, Rusty didn’t even know what to do. He seemed filled with shock and awe.

Rusty was given all the medical attention he needed, and a bath that lasted close to a half hour. Over the next few days, a loving family adopted Rusty, and the little dog who so desperately deserved love finally got what his heart had dreamt of all along.

Best of all, Rusty’s new adopting parents had brothers and sisters for him to play with, too. Everyone immediately got along great, and Rusty thoroughly enjoyed all the new love and attention he was getting.

Rusty will be able to live the rest of his life happily ever after.

If you see animal cruelty in your everyday life, say something. Let’s make sure our society never lets what happened to Rusty happen to any other dog ever again.