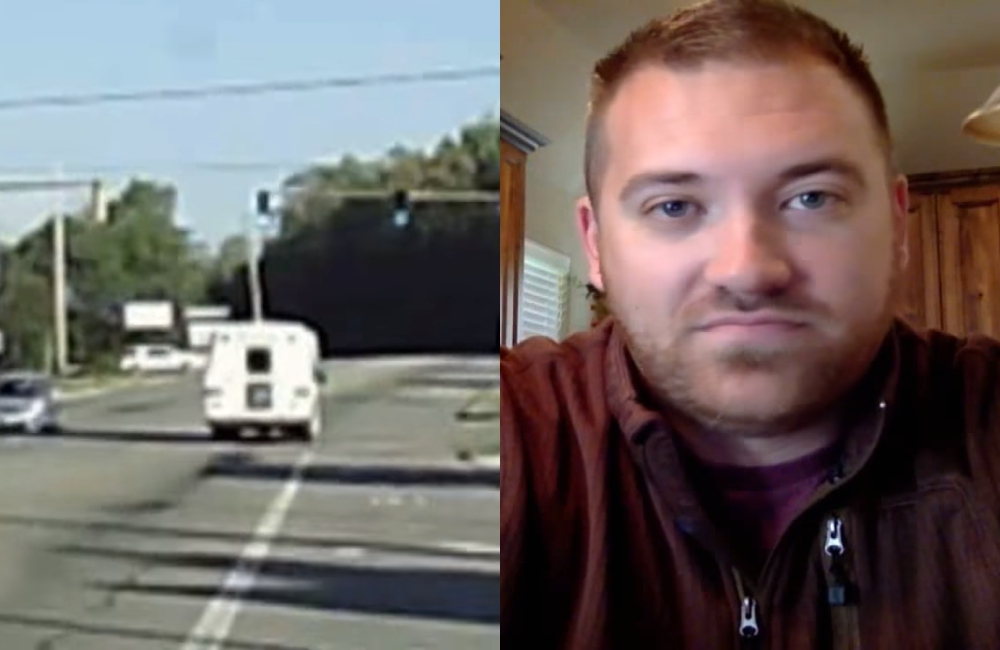 Ryan Ciampoli was driving along a highway in Arkansas. Suddenly he saw the rear door of the vehicle in front of him opening. He realized that something terrible was happening – and that he had to do something quickly.

There’s no doubt that Ryan is a pretty good guy. He’s both an emergency medical technician and a volunteer firefighter. But he wasn’t on duty when this extraordinary series of events began to unfold in front of him.

Instead, he was simply driving along Highway 65 in Harrison, minding his own business. He passed a McDonald’s drive-thru on a stretch of road lined with businesses. It was then that he saw something up ahead.

In front of him was a church bus. It was a large, solid vehicle and could hold as many as 28 passengers. But that wasn’t what attracted Ryan’s attention.

In fact, the rear door of the bus was slowly being opened, while it was still moving along the highway. Looking straight ahead, Ryan quickly realized that lives could be at risk. And his dashcam caught everything.

Inside the bus, a 4-year-old girl had taken an interest in the rear door of the vehicle. This was the emergency exit for the bus, which could provide an escape route in the event of a crash.

However, in this case, the door would not be a path to safety. The seconds that followed would begin to pass in slow motion, with moments turning into hours as a calamity unfolded.

The emergency handle to open the door was close to the ground. This made it easy to reach for little Emily Rose Turner.

Emily pushed the handle up and opened the door. Perhaps she thought she was opening a window. Suddenly, straight ahead of Ryan, the rear door of the bus swung open.

As the door moved back and forth behind the bus, the little girl tried to hold on to the handle. Ryan surely couldn’t believe what he was seeing.

“She went through such a horrible, terrifying experience,” Ryan would later tell Inside Edition. It was clearly painful to recall what he had seen that day.

Emily wasn’t trying to escape – she was simply opening the door. She was able to hold on for a moment, but then she fell. And she took the fall badly, dropping straight onto the hard tarmac. Ryan’s heart dropped.

“She let go and hit the pavement [and] landed on her face,” Ryan said. She couldn’t have taken the fall much worse. Ryan stopped his car in the middle of the lane and quickly made his way over to the girl to check whether she was alright.

With his medical training, Ryan was well placed to help. He’s all too familiar with seeing to people who have suffered terrible injuries.

Emily had been knocked unconscious by her fall but began to come around as Ryan approached. Ryan picked Emily up and carried her to the side of the road. It was there that he was able to inspect her injuries and take stock of her condition.

“She had a real deep laceration on her chin,” Ryan explained. “Her teeth were broken out the wrong direction, lips were just… [He gestures that they were swollen.] Right when she hit the pavement, she landed directly on her face.”

She didn’t remain calm, though. “The shock kicked in her little body and she started kicking and screaming,” Ryan told KHBS. “Stuff like that is really heartbreaking.”

A short time later, paramedics arrived at the scene and took her to hospital. But the little girl was desperate to be reunited with her mother. Emily needed surgery but, perhaps extraordinarily, a broken jaw was the worst of her injuries. “It can happen anywhere, anytime,” Ryan told KHBS. “Never would you think driving down the road, that something like that would happen”

Ryan actually received some criticism online for having moved the little girl following her fall. If there is the possibility of an injury to the neck or the spine then moving accident victims can be extremely dangerous for them.

“I’m a licensed EMT, I do know all that, but there is a one time out of a hundred where it is OK to move the patient,” he told Inside Edition. “That’s one of the times when they’re in clear danger. She’s lying in the middle of a busy highway where cars could come up and hit us, hit her, kill us both,” he explained. Ryan made a judgment call – and it might well have saved her life.

Indeed, lying unconscious in the road, Emily was extremely lucky to find herself in Ryan’s path. “A worse tragedy that could have happened, that would have been her getting ran over or dying from the impact of hitting the ground at that speed,” Ryan said.

Emily is now on the road to recovery. And, fortunately, her mom says that she doesn’t consider the driver of the bus to be to blame for her daughter’s fall. Ryan, meanwhile, would win a Fire-Dex “Hometown Hero” award.